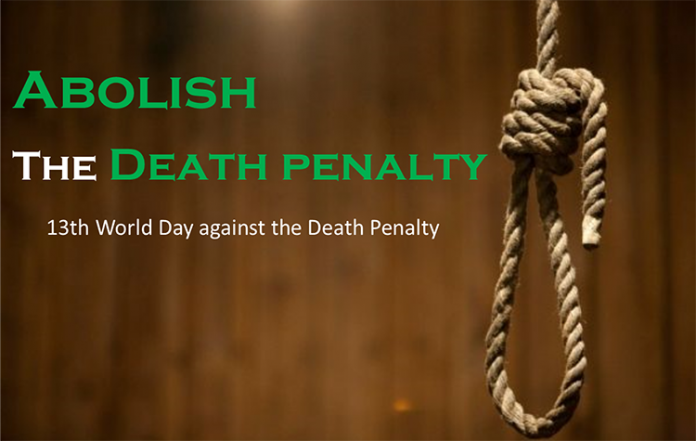 Today marks the 13th World Day against the Death Penalty. Only a few weeks ago the international community celebrated the adoption by the United Nations General Assembly (UN GA) of the Sustainable Development Goals (SDGs).

(Bangkok, Thailand, 10 October 2015) – Today marks the 13th World Day against the Death Penalty. Only a few weeks ago the international community celebrated the adoption by the United Nations General Assembly (UN GA) of the Sustainable Development Goals (SDGs). On 27 September 2015, leaders of 193 countries formally agreed to put all efforts together to realize a society where the principles of rule of law and human rights are universally promoted and respected. “In such a sustainable and civilized society there can be no space for the death penalty or any deliberate killing of human beings by the authorities”, stated Evelyn Balais-Serrano, Executive Director of FORUM-ASIA.

Capital punishment explicitly violates the right to life, the most basic of all human rights, enshrined in Article 3 of the Universal Declaration of Human Rights (UDHR) and Article 6 of the International Covenant on Civil and Political Rights (ICCPR), to which 160 countries are parties.

At least 2,466 people have been sentenced to death in 2014 around the world, of whom at least 607 have been already executed. In this grim context, Asia is no exception, with at least 937 new death sentences and an estimated 508 executions in 2014 – not including the high number of executions believed to have taken place in China[1].

“The fact that such a flagrant violation of the right to life could come from the same countries who “envisage a world of universal respect for human rights and human dignity, the rule of law, justice, equality and non-discrimination”[2] – as declared in the vision of the SDGs- is unconceivable,” Balais-Serrano remarked. “The existence of the death penalty implies increasing violence, promoting state-sponsored killings and the further brutalisation of our society. In this sense, the death penalty becomes an obstacle to the realisation of the vision and spirit of the SDGs”.

Goal 16 of the SDGs has as a target the promotion of the rule of law on a national and international level. A justice system grounded in the rule of law should not legitimise such an irreversible act of violence as the death penalty, which constantly carries the risk of sentencing to death an innocent person. At the same time, it serves no purpose in preventing crimes, as its deterrent effect is unproven.

In the 73rd plenary meeting of the UN GA held in December 2014, out of 188 UN Member States, 71 still have not voted in favour of the UN GA Resolution Moratorium on the use of the Death Penalty[3] or abolished capital punishment in their national justice system. Among them, 28 are Asian countries.

FORUM-ASIA has repeatedly joined the human rights movement in calling for the implementation of the UN GA resolution for a global moratorium on the death penalty and the ratification of the Second Optional Protocol on the ICCPR aiming at the abolition of the death penalty. This call should echo even louder today, as the world leaders commit to build a world in which there is universal respect for human rights. In such a world the blatant violation of the right to life, as is the death penalty, cannot be allowed.

FORUM-ASIA is a Bangkok-based regional human rights group with 47 member organisations in 16 countries across Asia. FORUM-ASIA has offices in Bangkok, Kathmandu, Jakarta and Geneva. FORUM-ASIA addresses key areas of human rights violations in the region, including freedoms of expression, assembly and association, human rights defenders, and democratisation.