Home Statements NOW MORE THAN EVER IS THE TIME TO MARCH, RESIST, STRUGGLE! 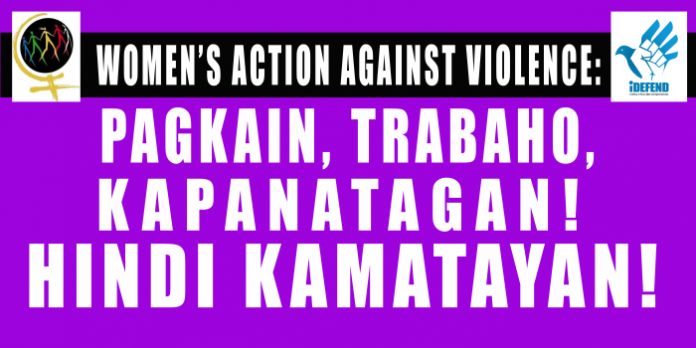 On March 8, 2017 women from urban poor communities, from factories, from offices, from the rural areas, the peasant and indigenous women alike, and from schools shall come out to show to the these forces that we are persisting, we are resisting, we are reclaiming our spaces, our rights, our lives.

NOW MORE THAN EVER IS THE TIME TO MARCH, RESIST, STRUGGLE!

Filipino women from across all sectors have fought long and tough struggles–and have won many. In the past decades, we asserted for better working conditions for workers, pushed for lands for farmersand decent housing for the urban poor,fought and brought down a dictatorship, claimed our reproductive rights, and resisted sexual and other forms of violence against women.

However, conditions around the world, and in particular, in Philippine society, are far from achieving gender equality and ending misogyny.Especially in these times when forces promoting patriarchal and anti-poor policies return to power.

In the labor front, working women are far from enjoying job security as most of them are in the service industry, where all forms of contractual arrangements are prevalent. Women’s multiple burden is aggravated by ENDO as they toil in difficult conditions in work places and remain to carry the bigger part of house chores.

Women in the agriculture sector have been able to gain lands titled to their own names, but their struggle for land rights is far from over.The Department of Agrarian Reform budget was reduced by P241.9 million compared to the previous year. DAR estimates a balance of 621,085hectares for land acquisition and distribution. Meanwhile, land-owning and business interests continue to push back through land claim reversals.

Indigenous women’s strength and power are slowly being recognized in their communities and in society at large. However, they are forcibly weakened by lack of food security due to the exploitation of natural resources for profit, while the violence wrought by government and private security forces of mining, logging and plantation companies push them to silence.

The Reproductive Health law was passed in December 2012 but its implementation has been significantly hampered by the limitations of rights through the Supreme Court decisions and the weak RH services and budget support in the public health sector.

The RH programs and all other economic, social and cultural programs are also being threatened in the communities by the extra-judicial killings that affect residents as well as community organizers.

On top of all these social-economic struggles, the forces of sexism and misogynistic violence have been further unleashed and kindled, especially under the new government of Rodrigo Duterte. Mr. Duterte doesn’t hide how he belittles women not only through his openly sexist remarks, which he often excuses as mere ‘jokes’.

On Women’s Day eve, the House of Representatives passed the Death Penalty bill, which women vehemently opposed, as it solidifies a patriarchal criminal justice system. For decades, we worked with other sectors for its abolition as it does not address the root causes of criminality, and instead propagates the patriarchal culture of vindictiveness.

Under Duterte’s war on drugs, increasing number of women, including lesbian and transwomen, accused as being drug users without benefit of just trial have been executed by the police and vigilante killers.  None have been punished for these extrajudicial killings for the president would prefer to exterminate those he perceives as dregs of society rather than to create a society where the unemployed would find productive, secure employment; where the poor would have decent lives and livelihood so they wouldn’t have to resort to drug use and selling–a society that nurtures, empowers women and all its citizens, and where impunity and violence would have no place.

The Filipino women have persisted amidst all these challenges in the past. The Filipino women will not be cowed, not now, not ever. We shall always rise to the occasion to struggle and defend our victories; to further fight for and realize our rights. We shall not allow the forces of misogyny, of death, of all kinds of violence against women to overcome us.

On March 8, 2017 women from urban poor communities, from factories, from offices, from the rural areas, the peasant and indigenous women alike, and from schools shall come out to show to the these forces that we are persisting, we are resisting, we are reclaiming our spaces, our rights, our lives.