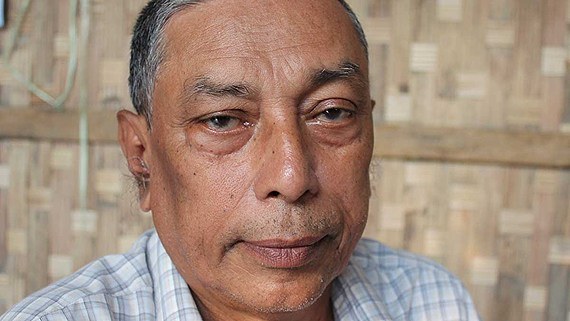 The government of Myanmar should immediately and unconditionally release Rohingya human rights defender Kyaw Hla Aung, who has been arbitrarily detained for 13 months, Fortify Rights said today. A ruling yesterday by the Sittwe District Court in Myanmar’s Rakhine State again extended the detention of Kyaw Hla Aung, 74, despite that the prosecution has repeatedly failed to produce witnesses in his case.

“Rakhine State authorities have kept Kyaw Hla Aung locked up for over a year, demonstrating the urgent need for the central govenrnment to intervene to free him,” said Matthew Smith, executive director of Fortify Rights. “The case against him is completely without merit. His ongoing detention violates his basic human rights and is an affront to the rule of law.”

The Myanmar Police Force arrested Kyaw Hla Aung on July 15, 2013 in Sittwe, Rakhine State in relation to public protests by displaced Rohingya Muslims against government efforts to register them as “Bengali” in a citizenship scrutiny exercise. Criminal charges against Kyaw Hla Aung stem from an unfounded allegation that he instigated the protests and participated in acts of violence against Myanmar police officers.

The authorities charged Kyaw Hla Aung under six articles of Myanmar’s Penal Code and, if convicted, he could face a sentence of up to 20 years in prison. The authorities initially detained him in Sittwe Police Station No. 1 before moving him to the Sittwe Prison in August 2013, where he has remained ever since. He has only limited communication with his family and legal counsel. Kyaw Hla Aung suffers from cardiac illness and the precise status of his health at this time is unclear.

Fortify Rights believes the Rakhine State authorities targeted Kyaw Hla Aung because he is a well-educated Rohingya with connections to the international community and an ability to communicate to a wider audience about the situation in Rakhine State, where severe human rights violations persist against Rohingya Muslims. Prior to his detention, Kyaw Hla Aung met with western diplomats, journalists, and others to describe the situation in Rakhine State and hardships endured by the Rohingya population.

“The arrest and detention of Kyaw Hla Aung is part of a broader campaign of persecution being perpetrated against the Rohingya ethnic minority in Myanmar,” said Matthew Smith. “The international community must address the flagrant disregard for the rights of the Rohingya population.”

The registration of Rohingya individuals as “Bengalis” reflects the official position of the Myanmar government that the Rohingya ethnicity does not exist and that those claiming to be Rohingya are migrants from Bangladesh. There are more than 1 million Rohingya in Myanmar who are stateless due to Myanmar’s 1982 Citizenship Law, which denies Rohingya equal access to citizenship rights.

In February 2014, Fortify Rights released a 79-page report, Policies of Persecution: Ending Abusive State Policies Against Rohingya Muslims in Myanmar, revealing official state policies describing targeted restrictions against Rohingya freedom of movement, marriage, childbirth, and other aspects of daily life in northern Rakhine State. All of the restrictions and abusive enforcement methods described in the report appear to remain in effect.

Following the outbreak of deadly violence in Rakhine State in June 2012, Myanmar authorities arbitrarily arrested hundreds of Rohingya men and boys in Rakhine State, many of whom may remain behind bars. Other Rohingya villagers and community leaders in and around Sittwe have gone into hiding, fearful that local authorities will subject them to arbitrary detention, torture, or worse. Many others have fled the country by sea.

“The case against Kyaw Hla Aung is only one example of the multitude of abuses against the Rohingya population,” said Matthew Smith. “The human rights situation in Rakhine State is appalling and it’s the direct result of policies implemented by the state and central governments.”

The Government of Myanmar