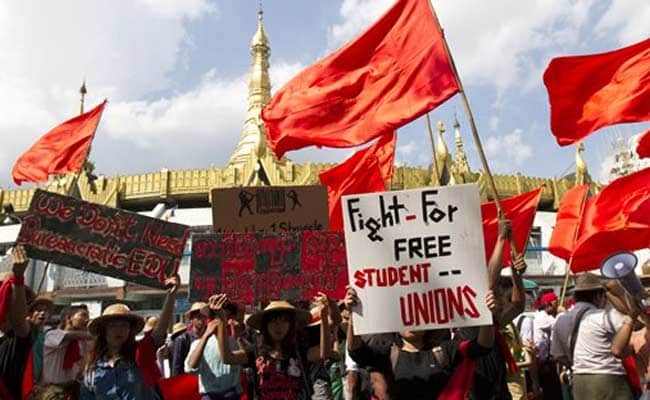 The government of Myanmar should immediately release from custody and drop charges against student protesters for the peaceful exercise of freedom of assembly, Civil Rights Defenders said today. In two separate incidents this week, authorities charged five student leaders in Yangon under the Peaceful Assembly and Peaceful Processions Act and arrested four student leaders in Mandalay.

End Harassment of Peaceful Protesters, Restrictions on Freedom of Assembly

The government of Myanmar should immediately release from custody and drop charges against student protesters for the peaceful exercise of freedom of assembly, Civil Rights Defenders said today. In two separate incidents this week, authorities charged five student leaders in Yangon under the Peaceful Assembly and Peaceful Processions Act and arrested four student leaders in Mandalay.

“This year has seen a growing state-sponsored campaign to silence critics and disrupt the legitimate exercise of freedom of expression,” said Brittis Edman, Southeast Asia Program Director at Civil Rights Defenders. “We are half-way through election year and the rhetoric of reform is ringing increasingly hollow.”

On June 30, approximately 100 students and protesters gathered in downtown Yangon to protest against the military’s veto power in parliament. In response, authorities charged five student leaders involved in the protests for unlawful assembly under Article 18 of the Act. According to sources, Paing Ye Thu, one of the five students originally charged, was arrested on July 2 and is now held in police custody. Authorities have allegedly vowed to identify more participants and charge them under this same provision.

Following the violent crackdown on student protesters and others in Letpadan in March, the right to freedom of assembly has repeatedly come under attack in Myanmar where authorities have continued to arrest, detain, and harass student leaders and those who vocalize support for the students. These incidents appear to reflect, more broadly, a growing intolerance of voices critical of the state, including human rights defenders.

The Peaceful Assembly and Peaceful Processions Act places a number of restrictions on the exercise of peaceful assembly that do not afford an effective realization of the right to freedom of assembly or expression. The current legislation provides that all protests require prior permission from the state before proceeding. Consent to hold assembly is granted only after providing onerous details, including the actual slogans and chants used during the protest, where even deviating from formally approved slogans is possible basis for arrest.

The government of Myanmar should unconditionally drop all charges and free those arrested for the peaceful and legitimate exercise of freedom of expression and assembly, including peaceful protesters and human right defenders arrested this week in Yangon and Mandalay. The government should amend the Peaceful Assembly and Peaceful Processions Act, to ensure that it meets the international standards of human rights.

The right to freedom of expression is firmly enshrined under the International Covenant on Civil and Political Rights, and restrictions placed on this right are permissible only if they meet very strict criteria. Under the United Nations Declaration on Human Rights Defenders, the state also has a positive responsibility to protect and create the circumstances for human rights defenders to effectively exercise peaceful activities.

“The recent escalation in arrests, harassment, and detention of protesters is a troubling trend, particularly as Myanmar heads towards elections this year,” Edman said. “People have the right to vocalize opposition and criticism without fear of reprisal. This is a crucial element in defining the legitimacy of elections to come.”