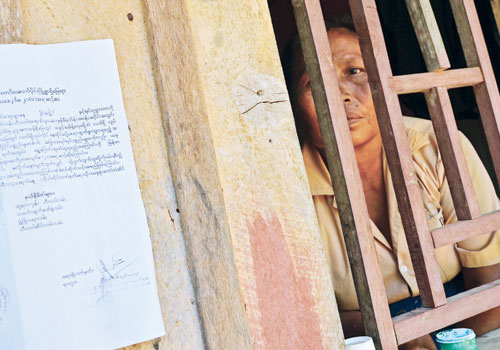 As Thai Prime Minister General Prayut Chan-Ocha visits Myanmar to revive the stalled Dawei Special Economic Zone (SEZ), the governments of Thailand and Myanmar should cooperate to establish a legal framework protecting the human rights of the area’s residents, said the ICJ.

As Thai Prime Minister General Prayut Chan-Ocha visits Myanmar to revive the stalled Dawei Special Economic Zone (SEZ), the governments of Thailand and Myanmar should cooperate to establish a legal framework protecting the human rights of the area’s residents, said the ICJ.

The multi-billion dollar Dawei development, strategically located along the Thai-Myanmar peninsula, will be one of Southeast Asia’s largest industrial complexes, with a 250 sq km deep-sea port, petrochemical and heavy industry hub.

After the project failed to attract sufficient investment, it was taken over directly by the Dawei SEZ Development Company, jointly owned by the governments of Thailand and Myanmar.

“This massive project has faced vocal opposition from some of the residents of the area, who allege that they have forcibly been deprived of their land, and that the development has damaged their farms, their livelihoods and their way of life,” said Daniel Aguirre, ICJ’s International Legal Adviser for Myanmar. “Any effort to revive the development now has the chance to avoid the mistakes of the past and to ensure that the rights of the residents of the area are protected.”

The project has faced consistent questions about its potential impact on the area residents’ right to an adequate standard of living, an in particular in respect to the rights to housing, food and water.

The ICJ has documented numerous complaints from affected villagers about displacement, loss of livelihoods and damage to local culture by the SEZ.

Many residents have refused to move into resettlement homes, complaining that they have not received fair and adequate compensation.

In Mutu village, fishermen told the ICJ that they were being charged with trespassing in the new SEZ.

Residents can be charged with trespass for refusing to accept inadequate compensation and mandatory relocation.

“The problems of the Dawei SEZ underscores the risks of approving large-scale industrial development in the absence of requisite legal safeguards and enforcement mechanisms,” Aguirre added. “Many projects in Dawei were established prior to the Environmental Conservation Law 2012, and thus without environmental, social and human rights impact assessments, and some are now alleged to have resulted in human rights abuses and environmental degradation.”

The ICJ highlighted a potentially significant legal development regarding disputes about development projects at Dawei, in particular, a long-running dispute centering on the activity of the Heinda tin mining project.

In an unprecedented move, the Dawei District Court has accepted jurisdiction over a legal action by Dawei residents against a Thai company, Myanmar Pongpipat, and Myanmar Ministry of Mines No. 2 Mining Enterprise, which operate the Heinda tin mining project.

Villagers allege to have suffered adverse environmental and human rights impacts, including forced evictions, and are seeking compensation for damage to property caused by wastewater from the Heinda tin mine.

“It is an important step that a court has begun to hear such a claim, but the enormous economic potential of Myanmar can’t be properly developed until there is a legal framework that takes into account the far-reaching human rights and environmental costs of large infrastructure projects,” said Aguirre. “Without proper environmental and land laws, rules and procedures that are human rights compliant, as well as an effective judiciary to enforce these laws and provide access to remedy, the Dawei SEZ risks undermining sustainable development and the protection of human rights in Myanmar.”

Dawei residents and civil society groups have filed a complaint with Thailand’s National Human Rights Commission over unfair land compensation and human rights violations, based on the absence of remedy in Myanmar and the international repercussions of unregulated foreign investment in Myanmar.

“The Myanmar and Thai governments should ensure there is a legal framework for environmental and social impact assessments, particularly human rights impact assessments, in line with international standards before investment permits are approved,” said Daniel Aguirre. “And all investors in Dawei should ensure communities are consulted and free prior informed consent guides the investment process, and undertake negotiated settlements with displaced communities, including villagers affected by the original development of the SEZ.”