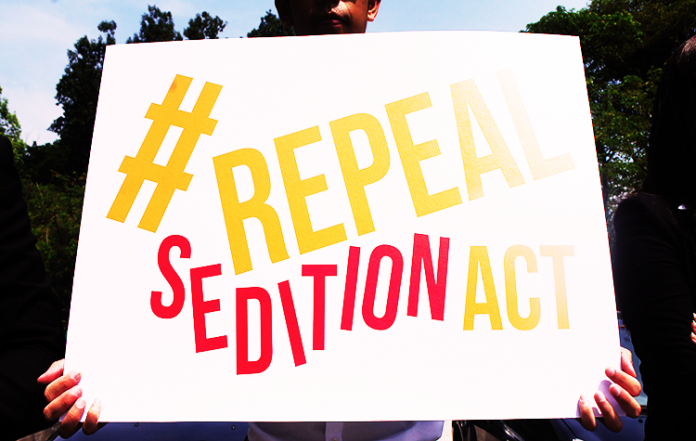 FORUM-ASIA and its member SUARAM express their disappointment over the ruling by the Federal Court of Malaysia to declare the Sedition Act 1948 constitutional. The verdict marks another serious setback to the already dismal environment for fundamental freedoms in the country and paves the way for the prolonged rampant use of the Act against any expression of dissent.

(Bangkok, 7 October 2015) – The Asian Forum for Human Rights and Development (FORUM-ASIA) and its member Suara Rakyat Malaysia (SUARAM) express their disappointment over the ruling by the Federal Court of Malaysia to declare the Sedition Act 1948 constitutional. The verdict marks another serious setback to the already dismal environment for fundamental freedoms in the country and paves the way for the prolonged rampant use of the Act against any expression of dissent.

FORUM-ASIA and SUARAM urge the government to take the necessary steps to repeal the Act, as well as withdraw all charges brought under the Act.

On 6 October 2015, following the challenge on the constitutionality of the Sedition Act by Azmi Sharom[1], Law Lecturer at Universiti Malaya, the Malaysian Federal Court ruled that the British enacted law is constitutional and a valid piece of legislation.

Azmi himself was charged under Section 4(1) (b) and 4(1) (c) of the Sedition Act 1948, in September last year, over an alleged seditious remark which was later published in the Malay Mail Online. He filed an application for the court to review Section 4(1) of the Sedition Act 1948, citing that it was unconstitutional as it is inconsistent with Article 10 (2) of the Constitution, which allows only Parliament to impose legal restrictions on the right to Freedom of Speech. The Federal Court dismissed this application and ruled that Section 4 (1) of the Act does not violate the perimeter of Articles 10 (2) and 10 (4) of the Federal Constitution.

Following the decision, Azmi will have to stand trial for sedition. If convicted, he will face three years in prison or a maximum fine of RM 5,000 or both.

“Instead of fulfilling its pledge to the Human Rights Council of March 2014 to repeal the colonial-era law, the Malaysian government persistently and indiscriminately uses the Sedition Act to restrict the Freedom of Expression of the Malaysian people, especially those who are critical of the government. It explicitly aims to create fear in society,” says Evelyn Balais-Serrano, Executive Director of FORUM-ASIA.

The Federal Court has indicated that Parliament is liable to balance between the rights of people guaranteed by the Federal Constitution and national security, and that the judiciary cannot override this.

FORUM-ASIA and SUARAM further express concerns over the impact of the verdict on politicians, academics, cartoonists and activists who have already been arrested, investigated and charged under the Act, as well as the future implications on the fundamental rights, including the right to Freedom of Expression, in the country. According to SUARAM, the number of those who have been arrested and investigated has significantly increased from 29 in 2014 to 206 cases in 2015.

“The ruling of the Federal Court yesterday could be seen as a ‘yes’ signal for the Malaysian government’s human rights violations. We reiterate our calls to the government and to Prime Minister Najib Razak to abolish the Sedition Act and drop all charges under the Act”, concludes Sevan Doraisamy, Executive Director of SUARAM.