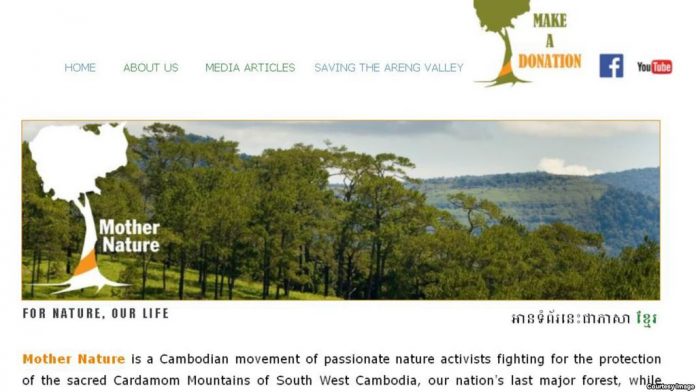 We further call upon the Ministry of Interior and Ministry of Foreign Affairs and International Cooperation to uphold internationally recognized and nationally guaranteed fair trial rights by allowing Mr. Gonzalez-Davidson to return to Cambodia and defend himself against these allegations in person.

The third Mother Nature member who has been charged is Alejandro Gonzalez-Davidson, a Spanish citizen and a founder and Director of Mother Nature. Mr. Gonzalez-Davidson is currently in forced exile from Cambodia, having been effectively deported on the orders of Prime Minister Hun Sen almost one year ago. Mr. Gonzalez-Davidson’s deportation was a direct retaliation for his long-standing environmental activism against the construction of the Chhay Areng hydropower dam in Koh Kong province. Despite the charges being publicized on 05 February 2015, the Koh Kong provincial court is yet to formally notify the three charged persons of the charges against them, greatly threatening their fair trial rights.

We, the undersigned CSOs, express our full support for Mr. Gonzalez-Davidson’s demand that his right to defend himself in person is respected, as guaranteed under Article 38 of the Constitution of the Kingdom of Cambodia and Article 14 of the International Covenant on Civil and Political Rights. The requirement for an accused person to appear in person before the court is additionally demanded under Article 300 of the Cambodian Code of Criminal Procedure. Currently, Mr. Gonzalez-Davidson is prevented from entering Cambodia until authorized by the Ministry of Interior or the Ministry of Foreign Affairs and International Cooperation. Furthermore, we call for the immediate formal notification of charges to the three charged persons, in order to safeguard their fair trial rights.

The three individuals have been charged with being accomplices under Article 29 of the Criminal Code to the offense under Article 424 of “threatening to commit destruction followed by an order”, which can be punished by up to two years in prison. These charges are in connection with the charges already brought against three other Mother Nature activists, Try Sovikea, Sun Mala, and Sim Samnang, who have been detained in Koh Kong Prison since 17 August 2015, charged under Article 424. The three imprisoned activists were involved in protests against allegedly unlawful and destructive sand dredging in Koh Kong’s Botum Sakor District. For further background information on Mother Nature, and the recent state repression against them, please refer to this Fact Sheet recently released by the Cambodian Center for Human Rights (“CCHR”).

These new charges are the latest in a series of arrests and incidents in which the authorities have relentlessly persecuted, and attempted to crack down on, the entire Mother Nature movement. Following the effective deportation of Mr. Gonzalez-Davidson in February 2015, the authorities have arrested a number of the organization’s members for their involvement in demonstrations, activism, and educational activities. The suppression of Mother Nature’s efforts to protect the environment is indicative of the wider crackdown on civil society in Cambodia and the RGC’s intolerance of legitimate peaceful activism.

The continued blacklisting of Mr. Gonzalez-Davidson and the possibility of him being tried and convicted in absentia would constitute major violations of his fair trial rights. Mr. Gonzalez-Davidson demands his right to defend himself and to answer any allegations before a judge. We fully support his demand to return.

“I demand my right to defend myself in a court of justice against these baseless accusations, which are nothing but a form of retaliation against me and the other activists for our effective campaigning to stop the destruction of nature in Cambodia.  It is my duty to do all I can to be next to them and demand that justice is served to all of us, no matter how hard that might be in the current judicial system.”

We, the undersigned CSOs, urge the prosecutor to drop the unjust charges of threatening to damage property followed by an order against all six Mother Nature members, and to ensure the fair treatment of environmental activists and human rights defenders seeking to protect Cambodia’s natural resources, which are the rightful property of the Cambodian people.

We further call upon the Ministry of Interior and Ministry of Foreign Affairs and International Cooperation to uphold internationally recognized and nationally guaranteed fair trial rights by allowing Mr. Gonzalez-Davidson to return to Cambodia and defend himself against these allegations in person.

This joint statement is endorsed by: