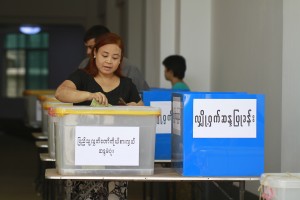 As Burma prepares for the much anticipated 2015 elections, what must not be forgotten is the much needed fundamental, structural and institutional reforms of governance to address the concerns, and political aspirations of ethnic communities, Burma Partnership said in a report released today.

[Rangoon – 9 October 2015] As Burma prepares for the much anticipated 2015 elections, what must not be forgotten is the much needed fundamental, structural and institutional reforms of governance to address the concerns, and political aspirations of ethnic communities, Burma Partnership said in a report released today.

The report, “Elections for Ethnic Equality? A Snapshot of Ethnic Perspectives on the 2015 Elections” analyzes whether the 2015 elections will achieve the stated aspirations of ethnic communities and ethnic political parties – ethnic equality, self-determination and a federal system of governance. Given the structures of governance in Burma, as stipulated by the 2008 Constitution, the report finds that the 2015 elections will not achieve these goals.

Speaking at the launch of the report, Sai Nyunt Lwin, General-Secretary of the Shan Nationalities League for Democracy said, “The 2015 elections are undoubtedly a very important event in the history of Burma, but for every ethnic community, these elections must go hand in hand with political reforms that address structural inequality and the disproportionate power of the Burma Army that has had devastating effects in ethnic areas for decades.”

The snapshot of the 2015 elections provides perspectives from Karen, Mon, Tavoyan, Pa-O, Shan, Kachin, Chin, Rakhine, Lisu, Lahu, Karenni and Intha community members and political parties. The report is based on wide range of interviews with 18 ethnic political parties contesting the 2015 elections and over 40 ethnic civil society organizations including youth groups, women’s groups, community development organizations, and political activists who are all active in ethnic nationality areas.

Burma Partnership found that there are two major impediments to achieving ethnic equality. One is that governance is highly centralized, with very little decision-making power over key issues that affect ethnic communities devolved to State and Region Parliaments. The second impediment to ethnic equality is the pervasive and far-reaching power of the Burma Army, from Union level Parliament through its 25% allocation of Members of Parliament and three key ministerial positions assigned to military personnel, as well as on a day to day administrative level, though the General Administration Department. The key document that institutionalizes these power structures is the 2008 Constitution, and as the military’s intransigence has shown, it is unwilling to change this.

“In the midst of the expectation and hype around the 2015 elections, it is vital to recognize the significance of the concurrent peace process,” said Khin Ohmar, Coordinator of Burma Partnership, “This is especially important given the inclusivity problems over signing the nationwide ceasefire agreement and the ongoing armed clashes in different ethnic areas.”
The stated aims of ethnic political parties and ethnic armed organizations are all broadly similar, but with different methods to achieve this. For ethnic political parties, it is within the institutional structures of governance, but for ethnic armed groups, it is outside these structures. The 2015 elections are much anticipated, but the report finds that for many ethnic communities, it is the peace process that garners as much, if not more, importance. While ethnic political parties’ participation in the 2015 elections provides opportunities, such as furthering their own development and institutionalization, and fostering a democratic culture, by placing disproportionate focus and emphasis on the 2015 elections at the expense of the peace process could serve to neglect the aspirations of ethnic communities.

“When conducting the research for this report, a federal system of governance was stated time and time again by ethnic communities and ethnic political parties as the most fundamental political change that will benefit their lives,” said Alex Moodie, Advocacy and Research Officer at Burma Partnership, “this ties in with not just democratic elections, but the ongoing peace process.”

The report gives recommendations to the Government, to both ethnic and non-ethnic based political parties, as well as to the international community from the perspectives of the ethnic civil society and communities that contributed to the report. The most important recommendation is to immediately engage in a process to change the institutional and governance structures of the country- including the 2008 Constitution – to serve the needs of ethnic communities in Burma, not just in the context of the 2015 elections, but for the long-term future of a democratic, federal Union.

The report was released at the Royal Rose Restaurant in Rangoon, Burma on 9 October, 2015. It was written and produced by Burma Partnership’s ‘Progressive Voice’ Policy Research Project.