Home Statements How Many More Lives? Burma Army Must Immediately Halt its Offensives in Kachin State 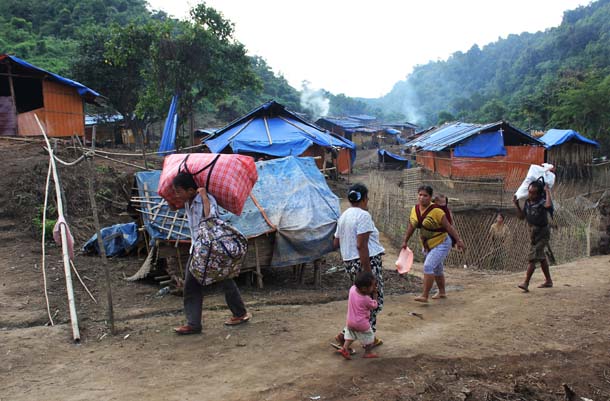 We reiterate the position of Burma’s civil society that calls for the safety and security of the IDPs, and urge the international community to pressure the Government to immediately cease and publicly condemn attacks on civilians and to engage in a political dialogue with the ethnic armed groups that will achieve a sustainable peace.

Despite repeated calls from the international community, governments and civil society for an immediate halt to hostilities in Kachin and northern Shan State, on 19 November, 2014 the Burma Army fired several artillery missiles as “warning shots” onto the Kachin Independent Army’s (KIA) training academy in Laiza, Kachin State, killing 23 cadets and seriously injuring 20 others. Laiza is not only the KIA’s strong-hold. It is a city with over 20,000 civilians and a host to over 17,000 internally displaced persons (IDPs).

Just days after the killing in Laiza, the Burma Army began firing shells near IDP camps. Some of the shells landed near a boarding school housing about 1,000 IDP children. These subsequent attacks near the camps threatened the lives of over 10,000 IDPs and raised much anxiety among the most vulnerable communities who have continuously fled the conflict. Fortunately, no one was hurt in these attacks, but many of the IDPs were forced to flee again in terror to the nearby jungle.

The narrative of “reform” and the sweeping political changes that have been praised and funded by the international community is quickly coming apart at the seams. While the Burma Government continues to use its rhetoric of change and democracy to encourage international governments, donors and investors to continue funding the peace process and development projects, they made one of the most deadly targeted attacks in Kachin State since the ceasefire broke down in 2011. This attack raised serious doubts among the ethnic groups who have threatened to abandon talks aimed at achieving a nationwide ceasefire accord. These talks, ongoing for nearly two years, have proved to be thus far redundant, as the Burma Army obviously has no other goal than the elimination of all ethnic armed groups without committing to any genuine, structural reforms.

Civil society in Burma has condemned these attacks, as demonstrated by series of protests by civil society and peace activists both inside the country and abroad, with one significant symbolic ceremony gathering hundreds outside the Myanmar Peace Center in Rangoon honoring the victims of the attack. Local groups are urging the UN and the international community to condemn these attacks and have called for the “safety and protection of the IDPs as well as ensuring unhindered and continuing humanitarian assistance for the IDPs in the KIO control area.” Ironically only the US Embassy in Rangoon raised concerns towards the military actions, while the donors of Burma’s peace process, including Norway and EU, have been silent.

The Burma Army has continuously targeted, attacked and killed civilians with impunity in ethnic areas under President Thein Sein’s government. These attacks on civilians and IDPs constitute war crimes and crimes against humanity and have been documented by Fortify Rights in their recent report. The report highlights systematic use of torture on civilians in Kachin State and northern Shan State throughout 2011 to 2014. According to the report, the Burma Army has “shelled and razed civilian homes, attacked makeshift camps of displaced persons, and entered villages while opening fire on civilians with small arms.” These acts, including extrajudicial killings committed by solders, are left unaccounted for under the unreformed, corrupt and unfair judicial system.

In January 2014, a report published by Women’s League of Burma (WLB), denounced the systematic use of rape by the Burma Army as an indictment of war and oppression against ethnic people. The report called for an end to state-sponsored sexual violence. Almost one year has passed and a follow up report shows that the situation remains largely unchanged. While the Burma Government has ostensibly signaled their willingness to address women’s rights issues in conflict areas, they have not actively engaged in amending the judicial and non-judicial mechanisms to investigate these heinous human rights abuses, failing to hold the perpetrators accountable.

Furthermore, International Human Rights Clinic at the Harvard Law School has published a legal memorandum that clearly shows Burma Army commanders involvement in crimes against humanity and war crimes under international criminal law. The Burma Government has ignored this well-founded research from an accredited international institution. This clearly shows the intransigence of the Government and their unwillingness to hold main perpetrators of these crimes accountable. The international donors funding the peace process should respond to this negligence by pressuring the Government to end these atrocities taking place in ethnic areas. Further funding without taking a strong stance and action against the Government will makes them complicit in these crimes.

We reiterate the position of Burma’s civil society that calls for the safety and security of the IDPs, and urge the international community to pressure the Government to immediately cease and publicly condemn attacks on civilians and to engage in a political dialogue with the ethnic armed groups that will achieve a sustainable peace.