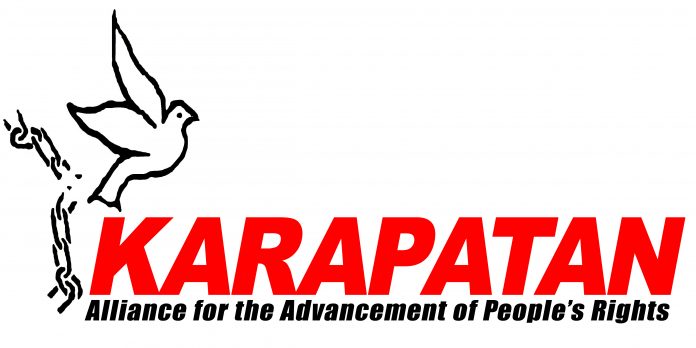 Karapatan’s leaders and staff members in the Southern Mindanao region are constantly under attack, as they experience surveillance, threats and harassment from the military. Human rights defenders attribute these violations to the intensification of military operations, especially in Mindanao, where 60% of the total troops of the Armed Forces of the Philippines are deployed.

On 27 April 2015, the Southern Mindanao office of Karapatan, Alliance for the Advancement of People’s Rights, was attacked by unknown men.

Karapatan is an alliance of individuals, groups and organisations, formed in 1995 for the promotion and protection of human rights in the Philippines. It is committed to the defense of people’s rights and civil liberties through education, training, advocacy, research and network building.

On 27 April 2015, at approximately 7 pm, three unidentified men attempted to enter Karapatan’s office in the Southern Mindanao Region. Several human rights defenders working for Karapatan were inside the office at the time of the attempted break-in. When confronted by those present, the offenders refused to identify themselves and attempted to climb the concrete wall in order to access the compound housing the office. The attempted break-in ended when staff working at the office called for police and media assistance. Police and members of Radyo ni Juan, a radio station contacted, responded and arrived at the scene.

On 26 April 2015, intense surveillance of the Karapatan office by unknown men was noted by those working at the Karapatan office. Mr Eduardo Regidor, acting Chairperson of the Paquibato District Peasants Alliance, was chased after leaving the office with his sons on the same day, but safely escaped. Karapatan staff have filed a report with police relating the events.

Karapatan’s leaders and staff members in the Southern Mindanao region are constantly under attack, as they experience surveillance, threats and harassment from the military. Human rights defenders attribute these violations to the intensification of military operations, especially in Mindanao, where 60% of the total troops of the Armed Forces of the Philippines are deployed. The current attack on Karapatan is believed to be linked to the attempts to seek the help of Karapatan by peasant leaders from Paquibato, Davao City, who fled from their communities following several cases of extrajudicial killing, forced evacuation, and other rights violations, committed there during the course of military operations.

I express my concern at the attack on Karapatan’s office, which I believe to be a direct attempt to disrupt the peaceful human rights work of its members within the Southern Mindanao region.

I urge the authorities in Philippines to:

Carry out an immediate, thorough and impartial investigation into attack at the Karapatan Southern Mindanao Region office, with a view to publishing the results and bringing those responsible to justice in accordance with international standards;

Guarantee in all circumstances that all human rights defenders in Philippines are able to carry out their legitimate human rights activities without fear of reprisals and free of all restrictions.