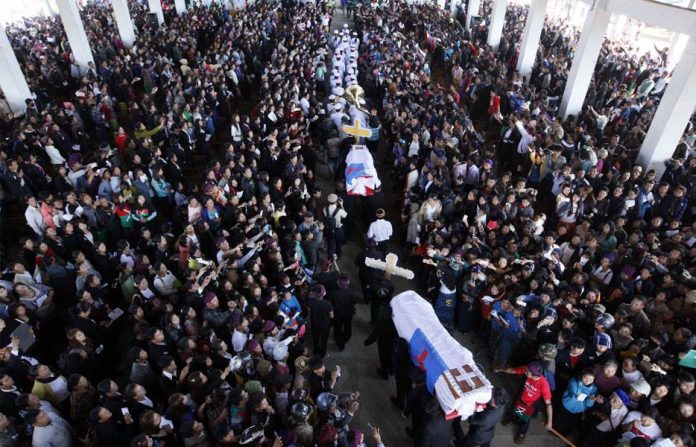 The authorities should retract their threats of legal action against those alleging military involvement in the murders and ensure that the perpetrators are brought to justice, Fortify Rights said. Fortify Rights is also calling for an independent international investigation, including Myanmar partners, into alleged violations of international human rights, criminal, and humanitarian law committed by all parties to Myanmar’s various ongoing armed conflicts.

On January 28, the Myanmar military threatened legal action against anyone alleging that the military is responsible for the killings of two ethnic-Kachin women on January 20. The following day, the office of President Thein Sein directed the threat to members of the media. These threats follow the ongoing prosecution of Brang Shawng, an ethnic-Kachin man who faces criminal charges for alleging that the Myanmar military is responsible for the death of his 14-year-old daughter, Ja Seng Ing.

“We’re seeing worrying trends. Wartime violence against civilians is continuing and the Myanmar military is increasingly using the justice system as a tool to silence critics,” said Matthew Smith, executive director of Fortify Rights. “The authorities should ensure swift justice for misconduct by soldiers rather than shielding them from public scrutiny and accountability.”

On January 20, the bodies of two ethnic Kachin women—Maran Lu Ra, 19, and Tangbau Khawn Nan Tsin, 20, both volunteer teachers—were discovered in a room they shared in Kaungkha village, northern Shan State. Pictures from the scene show multiple stab wounds on their partially-clothed bodies, which were severely battered and bloodied.

In the days that followed, villagers from Kaungkha village and various human rights organizations alleged that soldiers from the Myanmar Army’s Light Infantry Battalion (LIB) 503 raped and murdered the women. Military personnel reportedly sealed off access to Kaungkha village in the days following the murders and were involved in an investigation by local police into the crimes.

On January 28, Myawady—a journal operated by the Myanmar military—published a statement citing an “ongoing investigation into the crime” and claiming the Myanmar Army “was not involved in this murder case according to evidence analysed by criminal police and other cooperating investigation teams.”

The military’s statement in Myawady went on to threaten legal action against anyone who alleges that the military—known in Myanmar as the Tatmadaw—was involved in the murders, stating, “The Tatmadaw will take action based on the rule of law against those who accuse [soldiers] and write about it after the official report is released by the investigation team.”

Zaw Htay, a spokesperson for the office of President Thein Sein, supported the military’s statement, telling the independent news agency The Irrawaddy that media outlets could face legal actions if they allege military responsibility for the murders.

The authorities should retract their threats of legal action against those alleging military involvement in the murders and ensure that the perpetrators are brought to justice, Fortify Rights said. Fortify Rights is also calling for an independent international investigation, including Myanmar partners, into alleged violations of international human rights, criminal, and humanitarian law committed by all parties to Myanmar’s various ongoing armed conflicts.

“The military’s response to the tragic death of these women is to restrict basic freedoms, and that’s telling,” said Matthew Smith. “The authorities need to protect people’s rights, not promote a culture of fear and impunity.”

The threat of legal action against individuals accusing the military of wrongdoing reflects a pattern of conduct by the Myanmar military and government.

Brang Shawng, a 49-year-old ethnic Kachin man, faces two or more years in prison for filing a complaint with the Myanmar National Human Rights Commission (MNHRC) that alleged the Myanmar Army was responsible for the death of his 14-year-old daughter, Ja Seng Ing, in September 2012. Myanmar Army Major Zar Ni Min Paik initiated the legal case against Brang Shawng under Article 211 of the Myanmar Penal Code, which describes the crime of making “false charges.” Court documents specifically cite Brang Shawng’s letter to the MNHRC as the basis of the case.

In December, Fortify Rights and five leading international human rights organizations sent a letter to President Thein Sein regarding the prosecution of Brang Shawng, calling for all charges to be immediately and unconditionally dropped.

To date, President Thein Sein has not responded to the letter. A verdict in the case in Hpakant Township court is expected within weeks.

Customary international law and numerous international treaties protect the rights to freedom of expression and an effective remedy for human rights violations. International law also protects individuals who challenge human rights violations. The UN Declaration on Human Rights Defenders states that everyone has the right to “complain about the policies and actions of individual officials and government authorities with regard to violations of human rights and fundamental freedoms” and that states shall take action to “ensure the protection by the competent authorities of everyone . . . against any violence, threats, retaliation . . . pressure or any other arbitrary action as a consequence of his or her legitimate exercise of [these] rights.”

“The military is seeking to flip justice on its head by prosecuting survivors and their family members, journalists, and human rights defenders, and the government seems content to play along,” said Matthew Smith. “The authorities need to understand they can’t punish critics just because they don’t like what they have to say.”