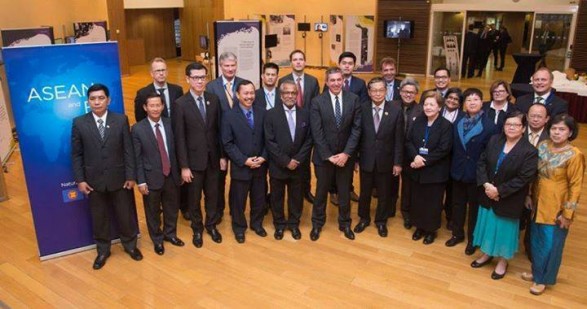 This policy dialogue results from the agreement of EU and ASEAN Ministers at the 20th EU-ASEAN Ministerial Meeting held in Brussels on 23 July 2014, to promote respect for human rights and the rule of law through exchange of good practices, information, dialogues, seminars and capacity building initiatives.

This policy dialogue results from the agreement of EU and ASEAN Ministers at the 20th EU-ASEAN Ministerial Meeting held in Brussels on 23 July 2014, to promote respect for human rights and the rule of law through exchange of good practices, information, dialogues, seminars and capacity building initiatives. In doing so, it built on the study visits to EU undertaken by the AICHR and ACWC in 2011 and 2013 as well as visits of the EU Special Representative for Human Rights, Stavros Lambrinidis, to Jakarta in 2013 and 2014.

The first policy dialogue allowed for open and constructive exchanges on themes of common interest, including recent human rights developments in the EU and in ASEAN, the rights of migrants, the rights of women, children, persons with disabilities and older persons, interaction with civil society, corporate social responsibility as well as economic, social and cultural rights and the right to development. Both sides saw the merits of encouraging dialogue and exchange of experience between civil society organizations from the two regions. They exchanged documents on their respective work. The ASEAN Delegation had an exchange of views with Members of the European Parliament and attended a seminar on “pan European human rights mechanisms” hosted by the Belgian Ministry of Foreign Affairs with the participation of representatives from the Council of Europe and the Organisation for Security and Co-operation in Europe. The ASEAN Delegation also met the Brussels-based Human Rights and Democracy NGO network and engaged with European businesses on Corporate Social responsibility, in a round table hosted by The Shift and CSR Europe. Site visits of Belgian institutions dealing with migrants, persons with disabilities and equal opportunities completed the one-week programme.

Ending this week of dialogue and events, the two sides expressed satisfaction on their mutual engagement and agreed to explore further regular dialogues on human rights issues of mutual interest. Some of the potential areas for bilateral and multilateral cooperation identified include: corporate social responsibility and human rights, strengthening accessibility for persons with disabilities, child protection systems, gender mainstreaming, promoting economic rights of women, violence against women and children, rights of older persons and trafficking in persons. The two sides also looked forward to further exchanges on freedom of expression and how it deals with the advocacy of national, racial or religious hatred and the incitement to discrimination, hostility or violence.