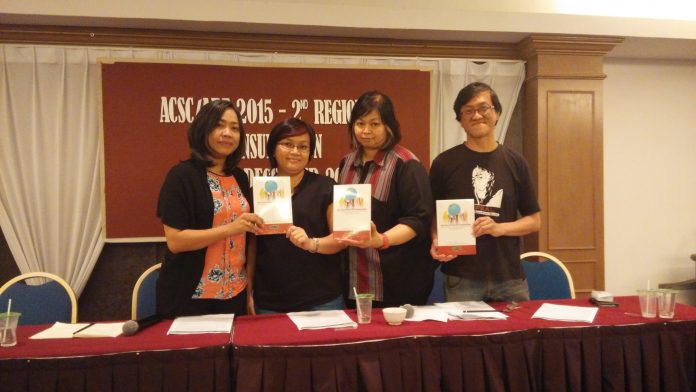 The 2013 performance of the AICHR and ACWC has been evaluated in the report “Four years on and still treading water”, published by FORUM-ASIA and the Solidarity for Asian People’s Advocacy – Task Force on ASEAN and Human Rights (SAPA TFAHR)

(Petaling Jaya, 12 December 2014), ASEAN governments should develop protection mandates of the ASEAN human rights mechanism as a way to strengthen the ASEAN Intergovernmental Commission on Human Rights (AICHR) and the ASEAN Commission for the Promotion and Protection of the Rights of Women and Children (ACWC) in the review of the Term of Reference of both bodies, said today by the Asian Forum for Human Rights and Development (FORUM-ASIA), Suara Rakyat Malaysia (SUARAM), and the Child Rights Coalition Asia (CRC Asia).

The 2013 performance of the AICHR and ACWC has been evaluated in the report “Four years on and still treading water”, published by FORUM-ASIA and the Solidarity for Asian People’s Advocacy – Task Force on ASEAN and Human Rights (SAPA TFAHR). The 108-page report identifies and assesses the AICHR and ACWC’s main activities in 2013 and provides recommendations to both ASEAN bodies and member states.

On the TORs review process
By 2014 the TOR of AICHR is due for review. The same review will also take place with the TOR of the ACWC by 2015.  “Civil society hope that the two reviews should ensure that the capacities and mandate of the AICHR and ACWC will be enhanced to ensure not only promotion, but also protection of human rights” stated Atnike Nova Sigiro (FORUM-ASIA). “This is now the role of government whether they want ASEAN to have a stronger human rights body which could address and enhance human rights protection in this region by enhancing the current TORs”.

Engagement with stakeholders
The report AICHR’s relationship with stakeholders, including National Human Rights Institutions (NHRIs) and civil society remain unclear and arbitrary. “The AICHR has drafted a guideline on its relationship with civil society, but the draft has never been released for public, and there is no official information of the status of such draft” said Yap Swee Seng (SUARAM). The report finds that the absence of a formal guideline has been used to reject request from civil society for engaging the AICHR. “It is different from the ACWC which started their engagement with CSOs since their first meeting in 2010, whether such formal guideline existed or not”, said Yap further.

On the ACWC
In 2013, ACWC has, to some extent, taken steps to consult civil society groups, as well as women and children, in the development of the Declaration on the Elimination of Violence Against Women and Elimination of Violence Against Children. Tanya Hisanan from CRC Asia explained, “The challenge now for ACWC is to encourage and monitor the implementation of the Declaration at the member states level which is made more relevant and urgent because of the looming ASEAN Economic Community in 2015 which can have adverse impacts on the lives of women and children”.

One main barrier to ACWC’s performance is the lack of budget for its programs and devoted secretariat to support their work. “We see this very much highlighted in the report. Member states must invest more on ACWC. In turn, ACWC must also look at the review of its TOR as an opportunity to strengthen its mandate on women and child rights protection, not only promotion” Tanya explained further.

ASEAN Community by 2015
Malaysia will chair ASEAN in 2015, and it will play an important role considering that at the same year ASEAN will aim to be an ASEAN Community. “We hope that Malaysian government would show a stronger commitment towards human rights during its term by facilitating these review process of the TORs of AICHR and ACWC, but moreover to facilitate space for these two bodies to engage with civil society and to address human rights situation which are faced by its people in the coming ASEAN community”, said Yap Swee Seng to conclude.

About FORUM-ASIA:
The Asian Forum for Human Rights and Development (FORUM-ASIA) is a regional human rights group with 47 member organisations in 16 countries across Asia. With offices in Bangkok, Jakarta and Geneva, FORUM-ASIA addresses key areas of human rights violations in the region, including freedoms of expression, assembly and association, human rights defenders, and democratisation. (www.forum-asia.org )

About SUARAM:
Suara Rakyat Malaysia (SUARAM)is a non-governmental organization established in 1989 to monitor and advocate for the respect of human rights in Malaysia. Through its consistent and uncompromising work, it has established itself as one of the key human rights organisations, one to which Malaysians turn to for information and support. (www.suaram.net )

About CRC Asia:
Child Rights Coalition Asia (CRC Asia) is a regional network of children’s rights and human rights organizations whose main objective is to mainstream child rights perspectives and agenda into the regional and international advocacy processes. It seeks to become the main child rights resource in the region for civil society organizations and children to enable them to meaningfully engage with national, regional, and global governance structures for the promotion and protection of child rights. (www.childrightscoalitionasia.org)