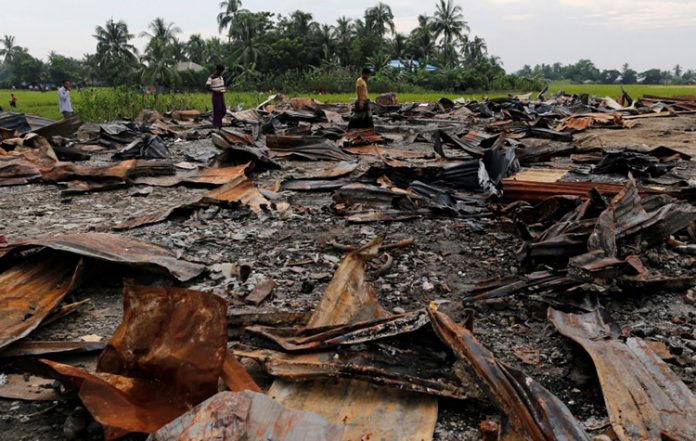 FORUM-ASIA together with Progressive Voice, Women’s Peace Network, Kachin Women’s Association-Thailand, and Ta’ang Women’s Organization, call on the UN Human Rights Council to establish a commission of inquiry or a similar mechanism to investigate allegations of grave international humanitarian law and human rights violations in Burma/Myanmar

(Bangkok/Geneva, 15 March 2017)  – The Asian Forum for Human Rights and Development (FORUM-ASIA), together with Progressive Voice, Women’s Peace Network, Kachin Women’s Association-Thailand, and Ta’ang Women’s Organization, call on the UN Human Rights Council to establish a commission of inquiry or a similar mechanism to investigate allegations of grave international humanitarian law and human rights violations in Burma/Myanmar, including in Rakhine, Kachin and Northern Shan States.

Speaking during the interactive dialogue with the UN Special Rapporteur on the situation of human rights in Myanmar at the on-going 34th regular session of the UN Human Rights Council, FORUM-ASIA and partners endorsed calls by the UN Special Rapporteur and the UN High Commissioner for Human Rights for a commission of inquiry. FORUM-ASIA noted that the government of Burma/Myanmar has repeatedly failed to conduct credible investigations into allegations of grave violations despite several international calls for investigations.

“We believe that only an international commission of inquiry backed by the UN Human Rights Council will be able to deliver justice and accountability for numerous allegations of grave human rights violations, including possible crimes against humanity” said Khin Ohmar of Progressive Voice. “Over the past five years, there have been at least six investigations and they have all failed to be credible or independent. Impunity has flourished, while accountability has suffered immensely”.

At the interactive dialogue, the UN Special Rapporteur reported on systematic, structural, and institutional discrimination through policy, law and practice, as well long-standing persecution of the Rohingya and other minorities in Rakhine State. She further detailed worrying accounts of recent abuses in Rakhine State and endorsed calls for the establishment of “a Commission of Inquiry” to investigate such abuses. The Office of the United Nations High Commissioner for Human Rights (OHCHR) and the UN Special Rapporteur have also said that it was likely that crimes against humanity were committed in Rakhine State.

The UN Special Rapporteur’s report also proposes a number of benchmarks and priority areas of technical assistance and capacity-building in accordance with the March 2016 resolution of the Human Rights Council, which has been welcomed by many States and civil society groups.

Several States speaking at the debate expressed concerns on restrictions on fundamental rights and freedoms, and discriminatory application of repressive laws against minorities. These include concerns over several abuses such as high occurrence of sexual violence and torture in Rakhine State, and widespread and systematic violations in a number of conflict affected ethnic regions, among them Kachin and Northern Shan States.

Many such violations are documented in detail in a recent briefing paper on the Government’s performance in the past year in addressing human rights challenges in the context of UN recommendations, which was released on Monday. The paper, jointly prepared by FORUM-ASIA and Progressive Voice, notes that, ten months after the National League for Democracy assumed office, “the overall situation across the country continues to be precarious with democratic space and rule of law still severely curtailed” and “legislative and policy inconsistency with international standards remains pervasive.” The paper further reports, “the implementation of ostensibly progressive laws and policies is continually beset by a discriminatory culture toward ethnic and religious minorities and the government’s ambitious targets for development.”

“Despite repeated denials and rejections of allegations of serious human rights abuses by the Government, the report by the UN Special Rapporteur, as well as recent reports and statements by the UN High Commissioner only add to mounting evidence against it,” said John Samuel of FORUM-ASIA. “In this context, it is imperative for the Council to establish a commission of inquiry on Burma/Myanmar when it votes next week.”