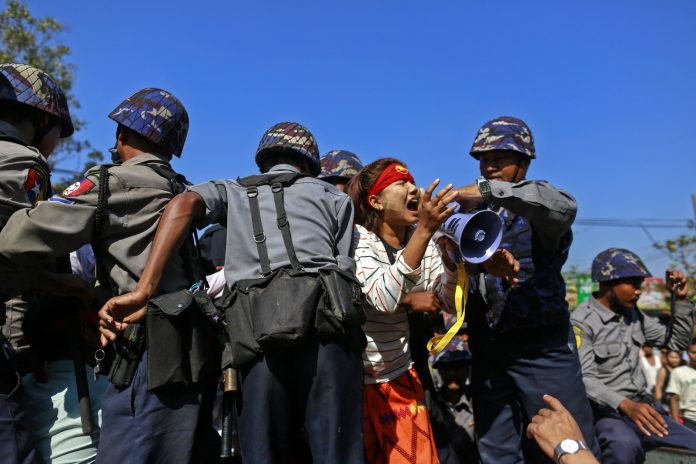 ASEAN Youth Forum, who have met the 10 leaders, led by President Thein Sein, in Nay Pyi Taw, is greatly concerned and condemns any form of brutality and violence against all young Southeast Asians.

The endless and painful struggle of Myanmar students for education reform has resulted to violence and brutality of the police in Yangon and Letpadan. The assault involved everyone who joined the student protest, including monks, local residents, those who raised their voice peacefully against National Education Law, which lack of transparency through public consultation, endangers the academic freedom and centralized power over the education system that leads the improper national budget allocation for education.

The protest started in January 2015 when hundreds of students marched from Mandalay to Yangon to amend eleven points found in the National Education Law, passed by the Myanmar Parliament in September 2014. Their demands include the freedom of student unions establishment, greater autonomy for universities, local language teaching in ethnic areas and 20% national budget allocation for education. This protests continued up to this day. The Government failed to listen to the demands on February by not amending the law on 28 February. Students group in Letpadan were blocked in a monastery to prevent their march to Yangon. The solidarity from other students in the country was instantly raised to support this cause by holding peaceful protests.

On March 10, after the protesters in Letpadan were allowed to go to Yangon, police and some groups of vigilante surrounded the peaceful and unarmed protesters and then brutally attacked them. Some injured students, monks and residents of Letpadan in this demonstration were taken away by the police. Until now, the detained protesters have not been released.

ASEAN Youth Forum, who have met the 10 leaders, led by President Thein Sein, in Nay Pyi Taw, is greatly concerned and condemns any form of brutality and violence against all young Southeast Asians. The Quality of our lives greatly depends on institutions that have the power and will to make reforms and allow democratic processes to work. As both present and future leaders of these region, we are very aware of our needs, wants and rights. Young people and civil societies in Myanmar have to be respected, be given their space, be able to claim their rights and be included in efforts to enhance their societies and nations. CHANGE HAS TO HAPPEN. NOW.

We strongly demand the Myanmar government and concerned institutions/agencies to take action and full responsibility to :

We ask everyone to support our call for change. Please endorse this Statement and share it to your networks and colleagues. Thank you and let’s all be vigilant, for human rights, for change, for freedom, for every person in Myanmar.