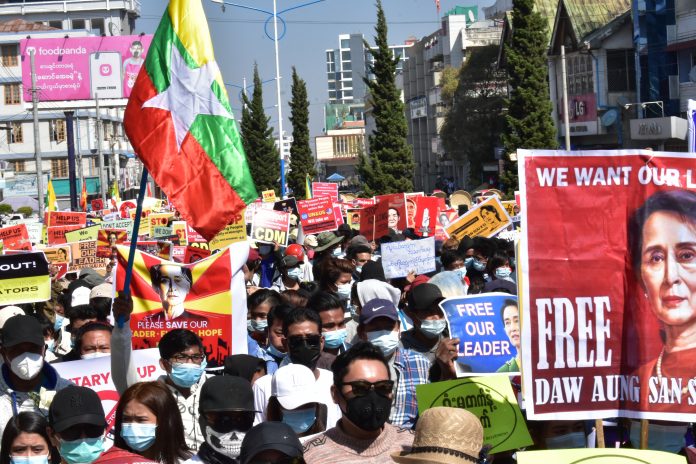 (7 June 2021, Jakarta) ‒ ASEAN’s continuous engagement with the brutal and illegitimate Myanmar military junta, while refusing to hold dialogues with the true representatives of the Myanmar people, is an affront to its own five-point consensus, the Asian Forum for Human Rights and Development (FORUM-ASIA), Progressive Voice and ALTSEAN-Burma said today.

The right groups, together with 407 other civil society organisations, condemn the continuous reluctance of ASEAN delegations to meet with other parties including the representatives of the National Unity Government (NUG), ethnic leaders, and the Civil Disobedience Movement (CDM).

The NUG was established following the 1 February 2021 coup and is made up of 76% of parliamentarians elected in Myanmar’s November 2020 elections.

‘ASEAN has failed to recognise the Myanmar peoples’ desire by siding with the illegitimate and murderous military junta led by the perpetrators of crimes against humanity, war crimes and genocide and target of international sanctions like Min Aung Hlaing. The decision of the ASEAN delegation to solely meet with the illegal junta provides legitimacy to the military junta and contributes to further perpetration of grave human rights violations in the country,’ said Khin Ohmar, Founder and Chairperson of Progressive Voice.

From 3 June 2021, an ASEAN delegation comprising of ASEAN Secretary-General Dato Lim Jock Hoi and Brunei Darussalam Minister of Foreign Affairs II Dato Erywan Pehin Yusof, representing the ASEAN Chair, have been reported to be solely engaging with the Myanmar military.

The rights groups asserted that the visit has been mired in a lack of transparency for the absence of engagement with all parties, contrary to point five of its five-point consensus which reads: ‘A special envoy and delegation shall visit Myanmar to meet with all parties concerned.’

‘The ASEAN delegation violated the five-point consensus, particularly the fifth point instructing the special envoy and delegation to meet with all parties concerned. In doing so, it has also violated the ASEAN Charter’s principles of democracy, the rule of law and good governance, respect for and protection of human rights and fundamental freedoms,’ said Debbie Stothard, Founder and Coordinator of ALTSEAN-Burma.

ASEAN’s five-point consensus on Myanmar was the result of the ASEAN Leaders’ Meeting on 24 April 2021.

Civil society organisations have repeatedly requested ASEAN to meet with all parties, including the NUG, the Committee Representing the Pyidaungsu Hluttaw (CRPH), ethnic leaders, ethnic armed organisations, and the CDM.

Since the announcement of the five-point consensus, ASEAN has repeatedly fallen short of upholding its own commitments to the Myanmar people.

Instead of steering the junta towards ending the violence in the country, ASEAN has created an opportunity for the junta’s own propaganda, emboldening their façade of authority.

The rights groups are further alarmed by the Myanmar junta’s attempts to shut down the internet since yesterday, believe to be aimed at sabotaging a press conference held by the NUG in conjunction with the visit of the ASEAN delegation.

‘Limiting the right to information is a rights violation. The Myanmar people have every right to access pertinent information on the goings-on in their country. We are disappointed that despite these severe developments, ASEAN is still tacitly endorsing impunity of the military junta. This must stop before it takes a further toll on regional stability,’ Shamini Darshni Kaliemuthu, Executive Director of FORUM-ASIA, said.

Since the beginning of the coup on 1 February 2021, the junta has killed 845 and arrested 5,708 people, and the numbers continue to increase rapidly. On 4 June 2021, junta forces killed at least 20 civilians in the Kyonpaw Township, 150 km northwest of Yangon, in what was the largest mass killing in nearly two months. Local residents only had catapults and crossbows to defend themselves against guns and grenades.

The rights groups call on ASEAN to immediately refocus efforts to engage with the NUG and other stakeholders in Myanmar and cease lending legitimacy to the junta or risk losing its relevance to all ASEAN citizens.

While the dire human rights and humanitarian crises in Myanmar are a direct result of the military’s violence, the solution lies with the people of Myanmar and the NUG, not the perpetrator. If ASEAN is to effectively engage Myanmar, they must hold dialogues with all parties concerned, the rights groups said.

‘In siding with the junta, ASEAN is in essence supporting grave violations of human rights and democracy, and infringes its own ASEAN Charter commitments to strengthen democracy and protect human rights in the region. This will negatively impact regional peace and stability, as well as letting down the people’s aspirations,’ the right groups said.

Signed by 419 civil society organisations including:

Note: Due to serious security concerns, names of the 407 civil society organisations who endorsed and signed this statement cannot be disclosed. The signed CSOs work on a range of human rights protection and rights-based issues in Myanmar.