Home Statements As 2014 Comes to an End, Students Hold Key to New Chapter in Burma Politics 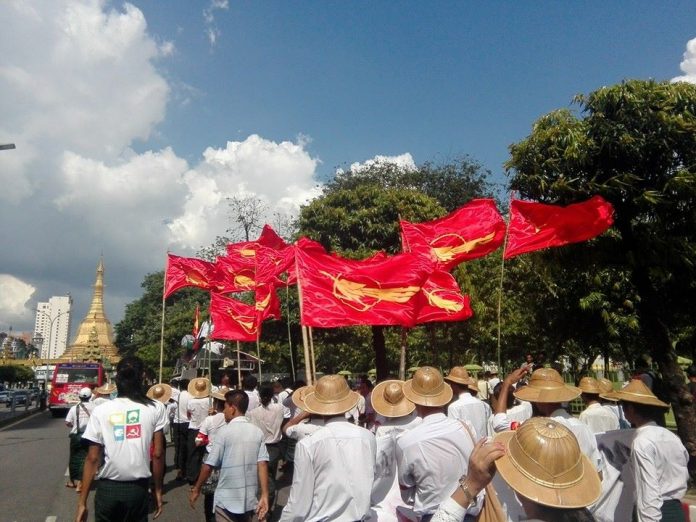 As we count down the remaining days of 2014, Burma Partnership takes a look back at what 2014 has offered. It has been nearly four years since President Thein Sein’s administration took office, and now is the time to digest all the developments during his presidency, to assess what the so-called reform process has really meant for the people of Burma thus far.

As we count down the remaining days of 2014, Burma Partnership takes a look back at what 2014 has offered. It has been nearly four years since President Thein Sein’s administration took office, and now is the time to digest all the developments during his presidency, to assess what the so-called reform process has really meant for the people of Burma thus far. And now is the time to properly examine this new political landscape and to determine who is who.

By the time the reforms were announced, everything was already set in motion to ensure that the reform process was controlled and manipulated by members of the old military regime. Looking at the notorious 2008 Constitution, the institutionalized prescription of 25 per cent of the seats in Parliament for military representatives, the dominance of the Union Solidarity and Development Party, the excessive power of the Burma Army and the National Defense and Security Council, and the growing investment of the State and affiliated business cronies in the media sector, it is not hard to conclude that a new system of repressive governance has been installed – by the same people who were once considered one of the most brutal and authoritarian regimes in the world.

However, it is important to remain hopeful. Although the new political landscape has contributed to the sophistication of old problems and the development of new problems, it has also offered Burma people new opportunities. One of the most inspiring aspects of the political developments in 2014 has been the reinstatement of the role of student unions in the country’s political affairs. Burma’s students were always at the center of major democracy movements throughout history – most notably in 1988 – and have now made a comeback.

Student unions which played a major role in various turning points of the country have regrouped themselves following the release of their leading members from prison by President Thein Sein’s administration, and since then have been advocating for academic freedom and student rights, as well as involving themselves in various political activities.

Furthermore, when the problematic Education Law was announced in the State newspaper on 16 March 2014, students were among the first to speak out. However, the Education Law was finally approved on 30 September 2014, and criticisms from the people have largely been ignored. Students have taken part in the National Network for Education Reform (NNER), a comprehensive coalition of those involved in education, including political parties, civil society organizations such as the 88 Peace and Open Society, student unions, individual experts, ethnic education organizations, religious organizations and many more. The NNER held extensive consultation meetings in different states and regions across the country to collate proposals and suggestions from the people, and then submitted various papers and recommendations to Parliament regarding the draft Education Law; however, many of their key concerns were not addressed in the final, approved version of the Education Law.

After attempting different options and continually calling for negotiations regarding the Education Law, students are quickly running out of options. The Action Committee for Democratic Education (ACDE), comprising members of the All Burma Federation of Students’ Unions (ABFSU), the Confederation of University Student Unions, and University Student Union – Myay Latt are campaigning for the amendment or redrafting of the Education Law. They held a four-day long demonstration from 14-17 November 2014 at various locations in Rangoon and some other parts of the country demanding a quadripartite meeting between the ACDE, the NNER, the Burma Government and Parliament. They have vowed to hold nationwide demonstration if there is no response from the Burma Government within 60 days, and they have been working hard preparing for a nationwide student movement.

Students deem the Education Law to be undemocratic and overly centralized. They call for the decentralization and democratization of the Education Law with specific demands to recognize student unions as legal entities, to allocate standard budget that is inline with UNESCO’s principle and to remove the clause that bars students from taking part in political activities. As it stands today, the Education Law was already approved two months ago, therefore, is unlikely to be amended any time soon. Rather, once a law is signed into force by the President, the by-laws then need to be drafted and finalized within 90 days, unless the Parliament designates a different deadline. Therefore, negotiations must take place either before the deadline set by the students or before the by-laws are approved.

Students are the main source of knowledge, courage and inspiration in Burma. Students are the future. Excluding students and young people from politics, blocking the nourishment of student unions and stifling them with a poor education system are nothing more than the same old tactics deployed by the old authoritarian military regime, to ensure that they remain in power. And so they have. There is no clearer indication that this current administration comprises the same people and espouses the same values as the previous regime. And, once again, a generation later, it is the students that represent the greatest hope for the people of Burma – and the greatest threat to the Burma Government. It is vital that their progressive voice continues to be heard.

How the Burma Government responds to the students’ demands will be a major indicator in any assessment as to how democratic Burma is today. If the Burma Parliament and Government are to prove that the reform process is heading in the right direction, they must accept the crucial role of the students in the democratization process, they must listen to their concerns, and they must take steps to negotiate a solution to the current crisis. 2015 will be a vital and pivotal year on so many fronts. Thank you for continuing to support our work in amplifying the voices of the people of Burma and we look forward to working with you in solidarity in 2015.

Our Weekly Highlights will take a short hiatus over the holidays, but we will return with a full issue on 12 January. We wish you happy holidays and all the best for 2015.