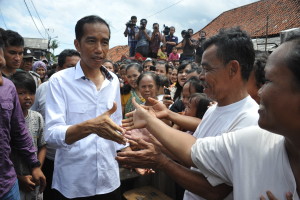 APHR is deeply concerned for the lives of these inmates and urgently calls on the Indonesian government to establish a moratorium on all executions.

JAKARTA — Lawmakers from across Southeast Asia joined with governments, civil society groups and others around the world in calling on Indonesia to immediately halt plans to carry out further executions and to reconsider a moratorium on the death penalty with a view to abolishing it.

APHR sincerely hopes that Indonesian President Joko Widodo is giving serious consideration to the strong and consistent calls for careful deliberation of his government’s decision to resume executions.

In January, Indonesia put six convicts to death, including five foreigners, and 64 others have exhausted their appeals and will be executed soon, the authorities say. The recent executions have prompted objections and appeals for restraint from governments and human rights groups across the globe.

ASEAN Parliamentarians for Human Rights (APHR) sincerely hopes that Indonesian President Joko Widodo is giving serious consideration to the strong and consistent calls for careful deliberation of his government’s decision to resume executions.

“This is not about whether Indonesia has the right to carry out executions under its legal system; it’s a questions of how President Joko Widodo is choosing to isolate himself and his government from the international community and Indonesian civil society on this issue,” said Charles Santiago, Chairperson of APHR and Malaysian Member of Parliament.

“There is no benefit from rushing forward with these state-sponsored killings and APHR implores the President to call a temporary halt to the executions to allow for inclusive debate and careful consideration of the implications. We all know that judicial processes are not flawless. You cannot take back a wrongful execution.”

According to reports, at least 10 individuals, including nationals from France, Australia, the Philippines, Brazil, Ghana and Nigeria, are at imminent risk of execution. Three death row prisoners were transferred by the authorities to Nusakambangan Island on March 4, the location of the scheduled executions but, APHR understands, the authorities have not yet given the inmates and their legal representatives the 72-hour notice of execution as required by law.

APHR is deeply concerned for the lives of these inmates and urgently calls on the Indonesian government to establish a moratorium on all executions with a view to abolishing the death penalty and to commute all death sentences to terms of imprisonment.

“There really is no convincing evidence at all that the death penalty works to deter people from particular crimes more than other forms of punishment. As the leader of one of ASEAN’s more progressive nations, President Joko Widodo should call for a national pause to reconsider the very compelling arguments against the death penalty,” said Kraisak Choonhavan, Vice Chair of APHR.