Home Statements AICHR Regional Workshop on the Role of Youth in Promoting Human Rights in ASEAN: Making Rights A Reality 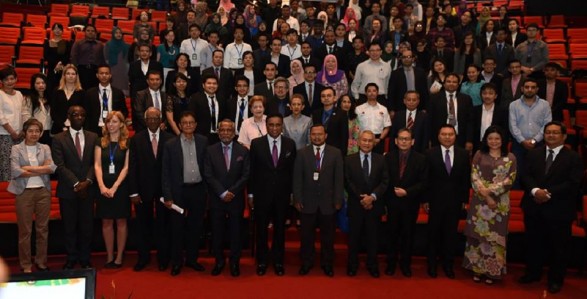 AICHR led by H.E. Tan Sri Dr. Muhammad Shafee Abdullah, the Representative of Malaysia to AICHR organized the “Regional Workshop on the Role of Youth in Promoting Human Rights in ASEAN: Making Rights A Reality” on 30 and 31 October 2015 at the Asia-Europe Institute of University of Malaya (AEI-UM), Kuala Lumpur.

The ASEAN Intergovernmental Commission on Human Rights (AICHR) led by H.E. Tan Sri Dr. Muhammad Shafee Abdullah, the Representative of Malaysia to AICHR organized the “Regional Workshop on the Role of Youth in Promoting Human Rights in ASEAN: Making Rights A Reality” on 30 and 31 October 2015 at the Asia-Europe Institute of University of Malaya (AEI-UM), Kuala Lumpur.

The AICHR Regional Workshop was officiated by the Honourable Dato’ Sri Reezal Merican Naina Merican, Deputy Minister of Foreign Affairs of Malaysia on 30 October 2015. The Opening Ceremony was also graced with the attendance of the Representatives and Alternate Representative of AICHR, Chairman of Human Rights Commission of Malaysia (SUHAKAM), Chairman of Global Movement of Moderates (GMM), Vice-Chancellor of University of Malaya, Director-General of ASEAN-Malaysia National Secretariat, Ministry of Foreign Affairs as well as Heads of ASEAN Mission and Dignitaries.

In his Keynote Address, the Honourable Dato’ Sri Reezal Merican Naina Merican, informed that as the youth makes up more than 60% of the ASEAN’s population, they play an important role in shaping major social, economic and political advancements in the region. Hence, investment to nurture youth development and leadership across the 10 ASEAN Member States is pivotal so as to harness their full potential, enabling them to be the real transformative agents and valuable resources for development and upward social progress.

The Honourable Dato’ Sri Reezal Merican Naina Merican further informed that initiatives such as this Regional Workshop would empower the youth, enabling them to voice out their opinions in the society, and participate constructively in the policy-making and governance at national and international spheres. Therefore, human rights education and dialogues with the youth is one way to enable them to learn, understand and appreciate the ASEAN and the existing regional human rights mechanisms and principles that are unique to us.