Home Statements A Call for Women’s Solidarity on the 103rd International Women’s Day: Making Women’s Rights & Meaningful Participation in Burma (Myanmar) and in ASEAN a... 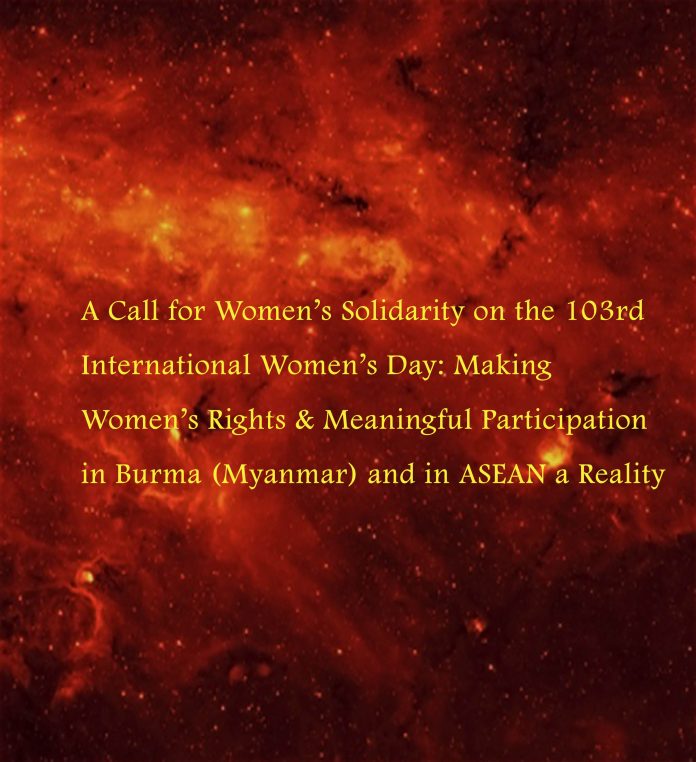 We are women, sisters, movements, networks, and activists from all over Southeast Asia and across the globe, expressing our solidarity with all the women of Burma (Myanmar) and the rest of ASEAN on this 103rd International Women's Day celebration.
This year's International Women's Day has a special meaning not only for the women across Southeast Asia, but most especially for the women of Burma who have long suffered from massive political exclusion and discrimination.  They continue to be deprived of their participation in democracy building processes such as in peace and treaty negotiations, constitution building and so-called reform processes, and participation in important international/regional fora such as the Association of Southeast Asian Nations (ASEAN).
Notwithstanding ongoing reforms and national reconciliation efforts, challenges remain in terms of addressing discriminatory laws and practices that infringe on Burmese women’s rights and political participation. Burmese women, especially those from ethnic communities, are essentially disenfranchised, marginalized and excluded from every level of post-conflict transition, especially where important decisions are made. The country has one of the world’s lowest number of women in the National Parliament, with only 5.7% seats in the lower house and 1.8% in the upper house occupied by women (IPU & UN Women, 2012). The proportion of women in parliament is even lower at the regional and ethnic states.
In this 103rd International Women's Day, we salute and are one with all women in Burma (Myanmar) in calling for the realization of women’s rights and their meaningful participation in Burma and in ASEAN. Burma is the host of this year's ASEAN Summit and it is strategic and timely for its women to claim their rights!
It is an opportunity for the country to face the challenge of not only fulfilling ASEAN’s vision of a "caring community”, but also a truly people-centered and gender -responsive ASEAN. Together with the rest of the ASEAN countries, Burma ratified various international instruments such as the Convention on the Elimination of All Forms of Discrimination (CEDAW) or the Women's Convention, and has adopted the ASEAN Declaration on the Elimination of Violence Against Women and Elimination of Violence Against Children that subsequently encourages the implementation of the United Nations Security Council Resolution (UNSCR) 1325.
It is thus incumbent upon the Myanmar government to implement these instruments and what better time to do so but in time for the International Women's Day!
We thus call on the Burmese (Myanmar) government and ASEAN to develop measures to open up spaces for women’s participation in decision-making structures and processes, and also to encourage mobilizations of women especially those involved in the broader peace processes at the national and local levels in a manner that is empowering and that promotes women’s human rights.
The Southeast Asia region and the world now look upon Burma (Myanmar) to exercise its leadership, and fulfil its commitment to respect, protect, and fulfill women's rights and pave the way for genuine democratization in the country.