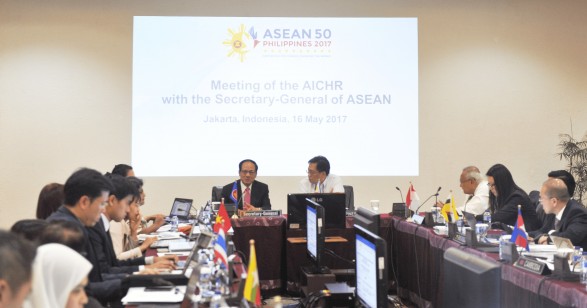 The ASEAN Intergovernmental Commission on Human Rights (AICHR) convened its 24th Meeting from 15 to 19 May 2017 at the ASEAN Secretariat, Jakarta. It was chaired by H.E. Leo Herrera-Lim, Representative of the Philippines to the AICHR.

The ASEAN Intergovernmental Commission on Human Rights (AICHR) convened its 24th Meeting from 15 to 19 May 2017 at the ASEAN Secretariat, Jakarta. It was chaired by H.E. Leo Herrera-Lim, Representative of the Philippines to the AICHR.

The Meeting was also updated on the ongoing AICHR priority activities to be implemented this year namely: on trafficking in persons, safe drinking water and sanitation, children, health, persons with disabilities; as well as on the proposed 2nd ASEAN-EU Policy Dialogue on Human Rights.

The AICHR held its annual dialogue with the Secretary-General of ASEAN and with the Committee of Permanent Representatives (CPR) to ASEAN, where the AICHR shared its activities to commemorate the golden anniversary of ASEAN. Both the Secretary-General and the CPR commended the AICHR on its expanded priority areas, and extended their support to the AICHR’s forthcoming activities.

Further, the AICHR and CPR agreed on the launch date of its joint activity, the ASEAN Youth Video Competition: “ASEAN Against Trafficking: Humans are not for Sale” to start at the beginning of June 2017, and for the winner of the regional competition to be announced during the ASEAN Summit in November 2017. These substantive discussions were greatly appreciated by the AICHR.

On day three, the AICHR held an interface with the Senior Officials Meeting Responsible for Information (SOMRI) where both bodies shared information on their respective mandates and functions, and exchanged views on ways to collaborate to increase the public’s awareness on human rights and deliver AICHR’s message to a wider audience.

During this five-day meeting the AICHR met with various Dialogue Partners of ASEAN, namely the United States, Australia, and Canada and discussed potential areas for future cooperation on human rights issues of mutual interest.

It also met with CSO with Consultative Relationship with the AICHR, and other organisations with an interest in AICHR’s work.

The Meeting expressed its appreciation to the ASEAN Secretariat for the excellent arrangements of the meeting. The AICHR will convene its next meeting in June 2017 in Thailand.