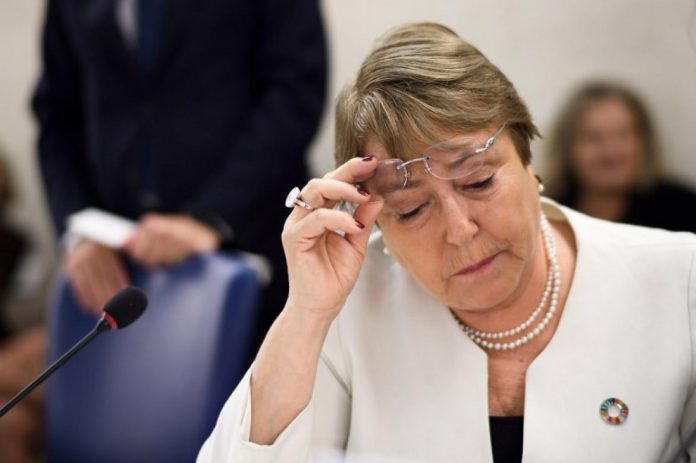 New High Commissioner for Human Rights Michelle Bachelet reads a document on the opening day of the 39th UN Council of Human Rights in Geneva. (AFP)

GENEVA — The new United Nations human rights chief has called for the creation of a “mechanism” to prepare criminal indictments over atrocities in Myanmar, amid allegations of genocide against Rohingya Muslims in Rakhine State.

Ms Michelle Bachelet made the call on September 10 in her first address to the UN Human Rights Council in Geneva since taking office on September 1 to succeed Mr Zeid Ra’ad Hussein as High Commissioner for Human Rights.

Bachelet urged the council to “pass a resolution, and refer the matter to the General Assembly for its endorsement, so that such a mechanism can be established”.

A similar panel has already been created for the Syrian conflict.

A UN Fact-Finding Mission last month issued a damning report that found there was enough evidence to prosecute Tatmadaw Commander-in-Chief Senior General Min Aung Hlaing and five other high-ranking officers for crimes against humanity and genocide against the Rohingya.

About 700,000 Rohingya fled northern Rakhine to Bangladesh after attacks by Islamic extremists in August last year triggered a Tatmadaw crackdown accompanied by reports of murder, rape and arson by troops and vigilantes.

Myanmar has vehemently denied allegations of ethnic cleansing, insisting that the Tatmadaw was responding to the attacks.

The Fact-Finding Mission has asked the UN Human Rights Council, which will be in session until September 28, to renew its mandate for another year.

If created, the new mechanism sought by Bachelet to focus on preparing cases for prosecution would comprise a separate group of experts.

Bachelet, a former Chilean president, stressed on September 10 that the proposed panel would also “complement and support the preliminary examination of the ICC Prosecutor”.

The International Criminal Court said last week it had jurisdiction to probe the crisis because of the cross-border nature of alleged “deportations” of Rohingya to Bangladesh, a decision that Myanmar has “resolutely” rejected.

Bachelet welcomed the ICC decision, describing it as “an immensely important step towards ending impunity and addressing the enormous suffering of the Rohingya people.

“I emphasise the imperative of justice for Myanmar,” she said.