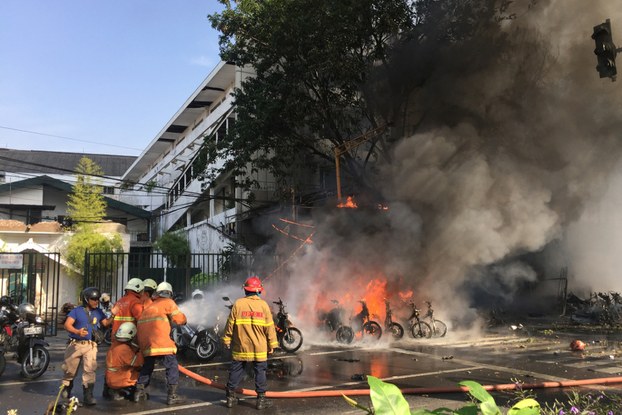 Firefighters battle a blaze caused by a suicide bombing at the Surabaya Center Pentecostal Church in Surabaya, Indonesia, May 13, 2018.

The security picture in Southeast Asia was far more stable this year than tumultuous 2017, when Islamic State (IS) militants took over the Philippine city of Marawi for five months. While there were attacks and attempted attacks by militants across the region, most had lower levels of lethality and professionalism, and no group really gained any traction.

Ironically, the two most significant attacks in 2018 may in fact reflect growing concern from within the jihadist ranks. The May suicide bombings in Surabaya, Indonesia involving two entire families, as well as the unprecedented suicide bombing by a foreign fighter in Basilan, Philippines, may have been attempts to goad others into action; representing internal debates and frustration over the loss of momentum and commitment to the jihadist cause.

And the impact of IS’s loss of more than 90 percent of its territory in Syria and Iraq could have implications for Southeast Asia as the region adopts a global insurgency model. Although IS has declared the establishment of an East Asian Wilayat – or province – there is little evidence this has had a major bearing on the flow of foreign fighters or resources into the region.

Fears of a centralized and unified IS presence in Southeast Asia are over-blown. What is now commonly referred to as Islamic State East Asia (ISEA) remains a loose constellation of small groups and cells divided by geography, competency and egos.

The security situation in the Philippines remains poor, imperiling peace and development within the country but also having regional security implications.

Preparations are being made for a January 2019 plebiscite for inclusion in an autonomous Muslim region in the south. If all goes to plan, an autonomous government with a new political system will be in place by mid-2019.

But the peace process is not a panacea.

And they are benefitting from the slow, top-down reconstruction of Marawi, an issue that continues to alienate the local population, many of whom remain were displaced by the siege and ensuing battle between the militants and the Philippine military.

Mid-2018 saw a series of clashes between government forces and Maute “remnants.” There are clear signs that the Maute group is itself rebuilding, tapping into local grievances.

The Philippines remains the only place in Southeast Asia where IS can actually control physical space. That will continue to be a draw for foreign fighters, who may bring some technical expertise, but more importantly, in the Philippine context, they can also bridge parochial divides and rivalries among groups.

The Abu Sayyaf Group continued to engage in kidnapping for ransom.  For the most part, they targeted local Filipinos, who tend to pay ransoms quickly.

But late 2018 saw a revival of maritime operations. A Malaysian and four Indonesian fishermen were abducted in two operations, while a Malaysian tugboat crew was able to thwart a third attack.

Trilateral maritime policing between Malaysia, Indonesia, and the Philippines, which began in 2017 after a spate of maritime kidnappings in 2016, had an immediate impact, deterring subsequent attacks. And yet, militants are once again feeling confident enough to target vessels.

In December, the Philippine Congress passed the second extension of martial law in portions of Mindanao that has angered the local population and has allowed the Philippine military to act with greater levels of impunity.

Indonesia saw a range of attacks in 2018. The majority were amateurish, conducted by lone wolves inspired by IS propaganda.

These included a grenade attack on a police station in Makassar, and a student’s machete attack at a Yogyakarta church that wounded six. A group of eight sword-wielding militants killed a policeman in Pekenbaru; four were killed. In May, police arrested two men in Palembang, in possession of TATP, an explosive materiel. In December, police arrested two militants in Yogyakarta for plotting to attack churches on Christmas.

Also this year, there were two separate prison riots involving terrorism detainees, at the Mobile Brigade (Brimob) police headquarters outside of Jakarta. Several terror suspects were either killed or arrested en route to joining the uprisings.

But the headline attacks of the year were a series of suicide bombing in Surabaya, in May, that included two entire families. A family of six, including four children aged 9-18, carried out three suicide bombings on a trio of churches there, killing at least a dozen people and wounding scores more.

It was the first successful female suicide bombing in Southeast Asia. Another family set off to detonate their IED at a police housing complex. The bomb went off prematurely, killing the parents and their son; a daughter survived.

As a result of the Surabaya bombings, Indonesia’s controversial Counterterrorism bill that had been stalled in parliament for nearly two years, was hurriedly passed. The new law criminalizes joining terrorist groups overseas and lengthens jail sentences for terrorism-related crimes.

But it has many controversial provisions, including the ability to strip citizenship, preventative detention, and gave the armed forces (TNI) a formal counterterrorism role.

Parliament allocated funding for the elite counter-terrorism police force, Densus 88, to double in size to 1,300 men, from 16 to 34 detachments deployed in all 34 provinces of the archipelago.

The new legal authorities and resources led to a surge in arrests in the second half of 2018. Over 200 had been arrested since the Surabaya attacks.

In July, an Indonesian court banned Jamaah Ansharut Daulah (JAD), which has morphed from an umbrella grouping for IS cells to a terrorist organization in its own right, while another court sentenced the spiritual leader of IS, Abdurrahman Aman, to death.

Indonesia continues to face a range of other counterterror challenges, including how to deal with the over 600 nationals who traveled to Iraq and Syria, as well as the pressing issue of penal reform.

Some 60 terror suspects were released in 2018, while some 140 are expected to be released in 2019. Meanwhile, al-Qaeda militant supporters who were responsible for a reign of terror during the first decade of the century, have laid low, quietly rebuilding their ranks.​

Counter-terrorism police remained very busy in Malaysia.  Unlike Jemaah Islamiyah, which never actively targeted Malaysia, IS groups have repeatedly tried to perpetrate violence.  But the real line of effort was in the eastern Malaysian state of Sabah, which remains a key transit point for foreign fighters traveling in and out of the southern Philippines.

Most cells that police disrupted in 2018 were relatively unsophisticated but focused on attacking Christian and Hindu minorities. The one exception to this was a five-man cell of Shia arrested in August that was plotting to attack Saudi Arabia from Yemen, according to Malaysian police.

Since February 2013, the police’s counter-terrorist special branch has arrested 425 suspected militants, including 44 women. Of those, 314 are Malaysians while the others are foreigners from the Philippines (39), Indonesia (35), Iraq (8), Bangladesh (5) and Yemen (4).  The government said it had stopped 18 terror plots. Over 50 Malaysians remain in Syria.

Despite the tight budget that the Pakatan Harapan government inherited following its surprise electoral victory in May, the government has pledged to continue to make Sabah security a priority.

The Pakatan Harapan government has still not made clear what it intends to do with several controversial laws, including the Security Offenses (Special Measures) Act (2012) and the Prevention of Terrorism Act (2015).

The insurgency in the three Malay-dominated provinces of southern Thailand, entering its 15th year, has seen a sharp decline in violence.

The low levels of violence (there were under 100 deaths, and some 150 wounded in 2018) is at a rate that the government can attribute it to criminal activity.

The pattern of violence, a decline in more indiscriminate bombings and more targeted shootings, suggests that violence is now very calculated and in response to government actions.

While a decline in violence is positive, it also minimizes any pressure on the government to make any meaningful concessions, despite its lip service to continue talks with the umbrella grouping MARA Patani. The main rebel group, Barisan Revolusi Nasional, continues to sit out the talks despite Malaysian and Thai government pressure.

There are also concerns that younger militants in the Deep South have grown frustrated with the current stasis. The year 2018 saw two Thai nationals, both with ties Deep South-based rebel groups, arrested in Malaysia in conjunction with terror cells, including one Johor-based IS cell.

After launching a series of attacks that led to a ferocious backlash by Myanmar security forces, which, in turn, drove more than 700,000 people into neighboring Bangladesh, the Arakan Rohingya Solidarity Army has largely gone underground, unable and unwilling to take responsibility for the massive human suffering it has caused.

Myanmar security forces have held a series of negotiations with their Bangladesh counterparts to allow for the repatriation of some Rohingya refugees, but, without full legal protections and citizenship, there have been few takers.

More than 100,000 Rohingya who remained in Myanmar are living in what can only be described as concentration camps, while government pogroms continue.

Despite concerns about terrorism, calls from transnational jihadist organizations to exact revenge on the Myanmar government it have been nothing but lip service.

There remains slim hope for any resolution of the humanitarian crisis.

The plight of Rohingya remains one of the real wedge issues within ASEAN, and the Myanmar government is able to rely on key backers to give it the diplomatic cover and financial backing that it needs to withstand international opprobrium, including charges of genocide by the U.N.