International Federation for Human Rights (FIDH) secretary-general Debbie Stothard, who was supposed to speak at the World Economic Forum in Vietnam, has been detained by immigration at the Hanoi International Airport.

“They (immigration officers) told me under Article 21 of their Immigration Act, I was barred from entering the country.

“They did not know the reason why, they said only the government would know and this is what the government has decided,” she told Malaysiakini on the phone while she was still being detained at the Hanoi airport.

Article 21 deals with cases of suspension from entry and among the reasons cited include for reasons of epidemic prevention, reasons of natural disasters and reasons of national defence, national security, social order and social safety.

Stothard, a Malaysian who deals with Burmese issues, pointed out that she has travelled to Vietnam before, to speak in human rights conferences but had never been stopped from entering the country.

“This is a bit ironic,” she said with a laugh, noting that she was now barred from entering the country to speak at an economic forum.

Stothard said she was in Manila attending another human rights conference when she was first informed that she may not be allowed to enter Vietnam.

However, there was no official confirmation for this and since she had already purchased her flight tickets and arranged her trip, she flew into Hanoi around 3pm today. 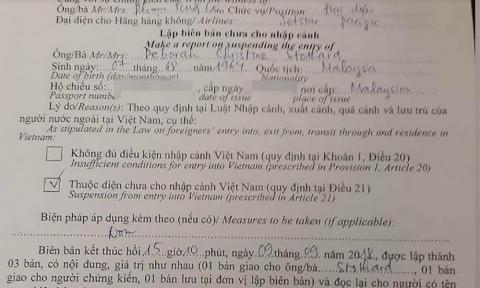 She was then detained and questioned by the immigration officers there, who asked her questions about who she was travelling with and about her kids.

“I asked them, do you plan to blacklist my children also?” Stothard said.

Initially, they told her she was not allowed to use her phone, but when she asked whether she was under arrest, they said no.

Though she was eventually allowed to use her phone, she said they told her she needed to provide them the numbers of everyone she called and to have each call put on a loudspeaker.

She told Malaysiakini that she is expected to be deported back to Kuala Lumpur on an 8.55am flight tomorrow.