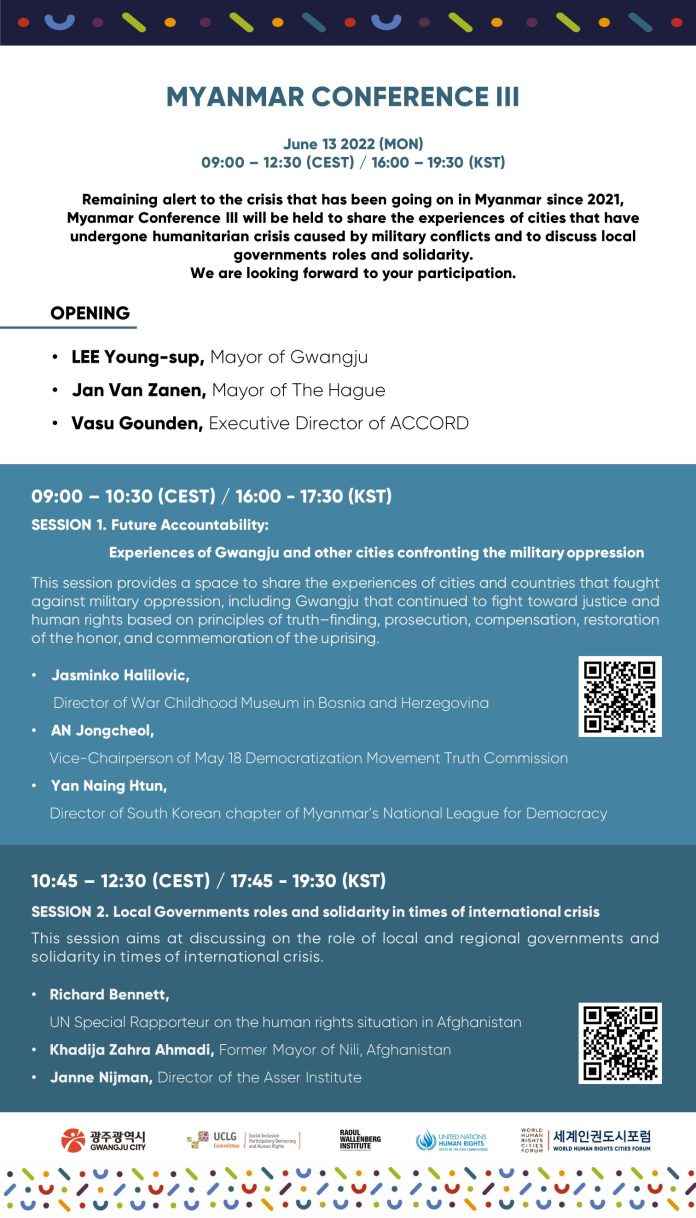 Despite the worldwide concern about the continuing crisis in Myanmar, the nationwide democracy movement of Myanmar people has been suppressed violently by the military junta resulting in at least 1,600 people killed, more than 12,500 arbitrarily detained, 440,00 displaced, and 14 million in need of urgent humanitarian assistance.

The suffering of the people has been worsened by the overwhelming challenges of COVID-19 while the people feel betrayed by the outside world with a lack of action.

To address the humanitarian crisis, the City of Gwangju had an International Conference on 6 April 2021 in collaboration with UN OHCHR, UCLG, and Raoul Wallenberg Institute. It produced Declaration on the Situation in Myanmar endorsed in three phases by heads of local governments of the world including 17 mayors and governors representing all of the high-level local governments of Republic of Korea. In addition, there was a special session on Promoting Shelter City Projects on 21 December 2021 to raise the awareness of the desperate situation of the human rights defenders and journalists, who are playing critical roles in conflict zones under the threat of their safety with focus on Myanmar.

The world attention is diverted to another severe humanitarian crisis in Ukraine, where 6.5 million fled the country and 8 million people were internally displaced as UNHRC warned.

Following the previous two Myanmar sessions in 2021, we are now organizing two more sessions to cover the humanitarian crisis caused by military conflicts in different times and in diverse regions including South Korea, Bosnia and Herzegovina, Myanmar, Afghanistan, and Ukraine under the umbrella of Myanmar Conference III.