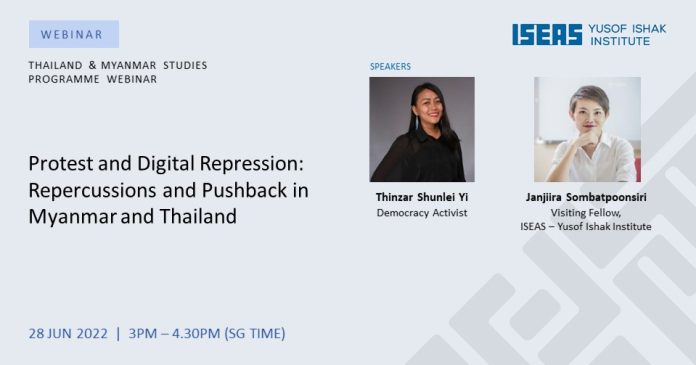 Recent protest movements in both Myanmar and Thailand have met with digital repression meant to deter or curb the movements’ activities and to undermine their support. In an era when on- and off-line mobilization frequently intersect, that repression has been instrumental in attempts to suppress pro-democracy activism. In Myanmar, online campaigning against the State Administration Council regime that seized power in February 2021 has been met with Internet shutdowns, blocking and removal of online content, and digital surveillance. Ownership changes in the telecommunications sector threaten to increase the junta’s control of the Internet. In Thailand, military-backed regimes have long blocked contentious online content, weaponized computer-related lawsuits against dissidents, consolidated surveillance infrastructure, and deployed cyber troops to manipulate social media. Digital repression has intensified in the aftermath of the country’s 2020-2021 youth-led protests. This webinar will address digital repression in Myanmar and Thailand, the intertwining of digital and traditional approaches to repression, and its impact on protest movements. It will consider how Myanmar and Thai protest movements have countered regime efforts to stifle digital activism.

Thinzar Shunlei Yi is a democracy activist and human rights defender. The first woman coordinator of Myanmar’s National Youth Congress and a two-term president of the Yangon Youth Network, she is the advocacy coordinator for the Action Committee for Democracy Development, a coalition of twelve community-based social and political networks established in 2013 to build a democratic federal state in Myanmar. Until January 2021, Thinzar was a host of “Under 30 Dialogue”, an online advocacy platform for young people in Myanmar broadcast on Mizzima TV. With Guillaume Pajot, she is co-author of “Mon combat contre la junte birmane”, published in December 2021.

Janjiira Sombatpoonsiri is Visiting Fellow in ISEAS’s Media, Technology and Society Programme; Assistant Professor and Project Leader at the Institute of Asian Studies, Chulalongkorn University, Bangkok; and an associate at the German Institute for Global and Area Studies. Her research focuses on nonviolent activism and civic space in the context of democratization and autocratization and on digital repression. She is the author of Humor and Nonviolent Struggle in Serbia (Syracuse University Press, 2015) and editor of the journal PROTEST. Her affiliations included membership of the Digital Democracy Network of the Carnegie Endowment for International Peace.